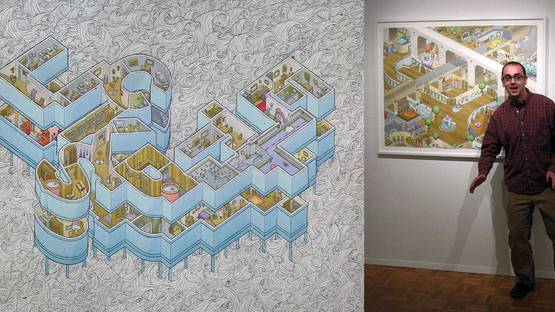 Scott Teplin is an American artist born in 1972. His education he got at the University of Washington, Seattle where he received his M.F.A. and at the University of Wisconsin, Madison where he received his B.S. Teplin is an obsessive drawer known for creating meticulously rendered drawings in which real world objects morph into a fantastical amalgamation of discordant forms, shapes, and colors. One of his series of drawings is made from collages of found photographs of horrifying crash scenes,  that he then redrew until the hard metal lines were transformed into softer shapes that more closely resemble organic objects. Ultimately about control, the pieces present an alternate interpretation of actual events, one in which documentation is transformed and transmuted to create a new reality that is as whimsical as it is disconcerting. About his preferred choice of color he states: “I'm a little crazy about my work being archival. I almost always use watercolor on paper for color - so I only use professional colors with real pigments as opposed to hues. Any art on paper is already going to have fugitive qualities - so I figure it's the least I can do.” Teplin works both digitally and non-digitally, but doesn’t use any software or other method of digital processing, for making changes to his art. He says that his art is made to be shown “as is", "live”. Digital methods he uses, as he says, are only to show the hand drawn art online.  When asked about post-processing on a computer, and if a computer is a helpful tool for making art, in an interview, Teplin said: “I usually don't like digital stuff. It's too sterile. Sometimes it works perfectly though - like when coloring hand drawn comics. Specifically in the works of Brunetti, Ware and Clowes.”

In addition to his solo shows in New York and Paris, he has exhibited extensively in and outside of the United States. Teplin’s art has appeared in or been reviewed by The New York Times, The New Yorker, ARTFORUM, and Art in America, among many other publications.  Numerous private and institutional collections hold his work, including The New Museum, NYC, Brooklyn Museum of Art, the Smithsonian Institution, Walker Art Center, Museum of Modern Art, NY and MOMA, SF, New York Public Library, Stanford University, and Yale University. He recently completed a major commission from Johns Hopkins Children’s Hospital.  His children’s book The Clock Without a Face is being adapted into a major motion picture through Paramount Pictures/Montecito Films.