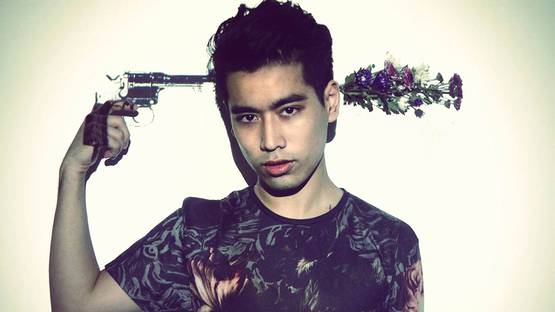 Scotty So is a young artist from Hong Kong who is active in many fields – photography, drawing, painting, digital design, and even sculpture. Scotty So creates pieces which are mainly inspired by the topics related to his young age, such as teenage angst and sexuality. In addition to being an artist, he is also a model and he frequently switches between the roles of being the photo model and being the photographer.

There is a variety of interesting recurring motifs in So’s work. For example, he uses simple geometrical shapes in his pieces, but also more complex figures, such as butterflies and plants. His series Plants is dedicated entirely to black and white photography of flowers, while Landscape, Feet portrays close-up frames of human skin, which resemble landscapes because of their structure and surfaces containing both hills and valleys. On the other hand, his Self series is more conceptual and aims at transferring certain identity topics to the viewers. So’s paintings and drawings differ from his photographs in the sense that they preoccupied with architectural designs from So’s native Hong Kong.

So has been an active exhibitor since 2013, when he had his first solo exhibits, The Origin of Geometry and A Moment of A Few Moments in Hong Kong. On June 16, 2016, So will participate in the Arcus Pride exhibition in Hong Kong. This exhibition is the part of a global event being held together in London, New York, Washington DC, Paris, Amsterdam, Sydney and Perth, to support Gay Pride. So is openly talking about his sexual orientation and he claims that his gay world is tantalisingly dark yet intelligently catchy, which means he’s doing his best to represent his state of mind in a creative way, through photographs, drawings and paintings.

Young Artist on the Way to Fame

Scotty So playfully takes on the emotional and technical roles of both model and photographer and he’s extremely successful in drawing in the viewers with his creative early experimentation. So far, So has shown his work mainly in Hong Kong and Shanghai, but we hope he’ll become active in the international art scene as well, because his art addresses the issues many young people are concerned about.

Scotty So lives and works in Hong Kong.

Featured image: Scotty So – Self-Portrait
All images courtesy of the artist.