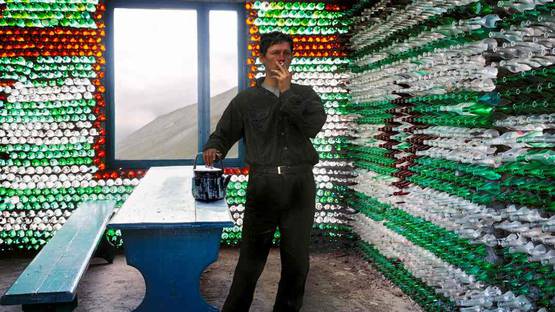 Sergej Jensen is a Danish contemporary artist, born in 1973. Using a spectrum of abject materials like jute, burlap coarse linen, and focusing on their most marginal qualities, the painter presents melancholic tableaus. By deploying large fields of unaffected raw texture, crude collage elements, and subtle planes of pigmented washes, the painter engages the viewer in a pursuit of content.

Jensen was born in Maglegaard, Denmark, and he studied at the Städelschule, Hochschule für Bildende Künste, in Frankfurt, Germany. Sergej Jensen’s work draws on a wide range of materials and formal references. Primarily known for his textile works, his lyrical compositions incorporate a variety of fabrics, from burlap and linen to silk and wool. His earlier work, made predominantly of found and purchased fabrics stitched or patched together, delineated a steady midpoint between the artist’s sensibilities and his given circumstances.

Working within the idiom of minimalist painting, Jensen takes its material support – the canvas – and sews, bleaches, stretches or stains the cloth to create works that waver between abstraction and representation. The principle of the readymade and recycling also suffuse his practice, off-cuts from previous works often re-appear as motifs for new paintings, and hand-knitted lengths are sewn or pulled over stretchers. Sections of fabric are left outside to let the weather alter its surface. His practice draws attention to seemingly incidental details such as flecks of wool or frayed edges, and his muted palette and gestural mark-making, whether applied in paint or stained with bleach, point as much to negative space as to delineated forms. Although the imagery can be hard to read, the titles given often allude to their point of origin in recognizable forms, such as Tower of Nothing made from recycled moneybags, or Eye of the maker featuring various banknotes of different currencies, which point to his unabashed relationship to the commercial market.

While the discourse of Jensen’s paintings is often associated with the work of Rosemarie Trockel, Sigmar Polke, Blinky Palermo and Michael Krebber, it is the production of his own music, films and collaborative performances that bears as large an influence over his practice. In previous gallery exhibitions, Jensen has also subverted the gallery context by the arrangement of his paintings alongside additional domestic elements such as a fireplace, rugs or carpeting. For example, for the Berlin Biennial, Jensen created a ‘waiting room’ lined with chairs, paintings, appliquéd fabric ceiling and a monitor with a film by Jensen capturing from a window unsuspecting passers-by in a park.

His work has exhibited in several solo exhibitions, and in a number of major international group exhibitions in Berlin, and at the São Paulo Biennial.