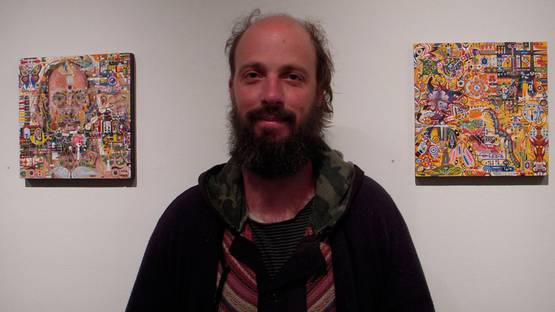 Shawn Thornton is an American artist with a bit strange story surrounding his inspiration source – namely, he is a cancer survivor. More than five years, this artist lived with an diagnosed brain tumor. Shawn actually believes that his art adverted to the presence of a cancerous brain tumor way before doctors even found it.

Thornton was born in 1977 in Fairfax, Virginia. He attended Skowhegan School of Painting and Sculpture, and in 2000 he received his BFA in Fine Arts, Painting and Printmaking from Virginia Commonwealth University in Richmond. Right in the middle of his university trajectory, Shawn developed cancer of the pineal gland - a size of a grain of rice - located at the center of the brain.

The philosopher René Descartes called it the “the principal seat of the soul and the place in which all our thoughts are formed” according to the Stanford Encyclopedia of Philosophy. This gland was scientifically connected to production of the psychedelic compound called DMT, the chemical found in many powerful psychedelics. For all that, pineal gland was often nominated ‘third eye’ because of its mystical and spiritual associations – opening some kind of a door to a higher spiritual consciousness.

During the condition progression, Shawn’s art became more complex and closer to scenes linked to DMT drug experience. The series of paintings were kind of his visual diary, he was depicting what he actually saw – his art was filled with the elements of mythology, symbolism and the occult.

Witch Doctors at The Eye of The Solar Epoch

Shawn’s imagined parallel realm was the colorful paintings he created in an attempt to decrypt the mechanisms of illness through a disciplined medium.

“I've had a lot of truly mystical and otherworldly experiences as a result of my history and battle with brain cancer and I'm really drawn to things that resonate with a certain powerful energy.”

In 2007 Thornton was awarded with a Pollack-Krasner Foundation Grant. Before that, he earned a Vermont Studio Center Full Fellowship and Skowhegan School of Painting and Sculpture Scholarship.

Shawn Thornton lives and works in Philadelphia and Skowhegan, Maine.