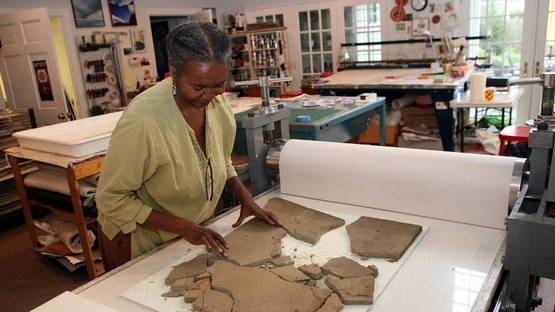 Sheila Crider is an American abstract artist, born in Beckley, West Virginia. Her interest in art is intertwined with her love for language. She explores the visual possibilities of language, as well as the notion of art as language and language as art. Crider attended University of Virginia in Charlottesville, Virginia, where she studied African-American studies and obtained her Bachelor of Arts. Since then, she has been the recepient of many awards, grants and commissions. Sheila was the artist in residence at Stone Quarry Hill Art Park in Cazenovia, New York in 2011; at Leighton Studios, The Banff Center in Banff, Canada in 2006; and Cite Internationale Des Arts in Paris, France in 1997.

Sheila regards herself as a mid-career artist. She predominantly worked with paper. From handmade stationery sold at art fairs and crafts markets to galleries, Crider's art found the way to reach art lovers. The venues where she exhibited include Parish Gallery, in Washington DC, Vagabond Gallery in New York, and US Embassy in Amman, Jordan, where she participated in the exhibition Art in Embassies.