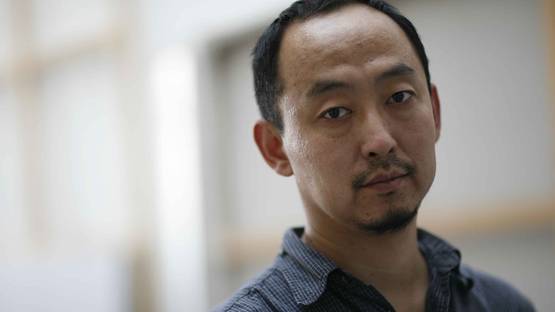 Shi Xinning is a Chinese contemporary artist born in 1969 in Liaoning Province, best known for his series of oil paintings presenting an idealized, energetic Mao Zedong in the company of Hollywood stars, artists and political figures. Xinning received a formal education in art at the Lu Xun Academy of Fine Arts in Shenyang, Liaoning Province, graduating in 1990.

Trained in China, Shi Xinning’s paintings are influenced by both social realism and European styles. Using the authoritative qualities of both, Xinning embarks on history painting with a twist. Taking his imagery from iconic press photos, his canvases faithfully represent the world as we know it: the Yalta Conference in familiar 40s sepia tone, the Queen Mum in carriage emblazoned in newspaper black and white. It’s only on second glance that Xinning’s alterations become evident. Nestled between Churchill and FDR and conversing happily with royalty, Mao takes his place amongst the great leaders of the 20th century.

In China-fying history, Xinning investigates dynamics of both the west’s Eurocentric, and China’s isolationist past world views. Humorously illustrating the Chairman’s import and omnipresence in 20th c Chinese society his insertion of Mao into the fabric of western collective conscience seems entirely plausible. Infusing the totems of propaganda currency with a sense of normality and humility, Xinning re-authors the most cherished moments of collective memory with a “Forrest Gump” effect, creating a specious mythology based in Hollywood schmaltz and unabashed optimism.

Xinning portrays his scenes with a high level of detail, which gives his pictures a photorealistic appearance. He also uses very subtle brushwork, which helps support his illusion that his paintings are historical photos.

He has shown work internationally in many exhibitions including Mahjong at the Kunstmuseum in Bern, China Art Now at the Marella Gallery in Milan, China Contemporary Painting at Fondazione Cassa di Risparmio in Bologna, and Landscapes at the Shanghai Gallery of Art.