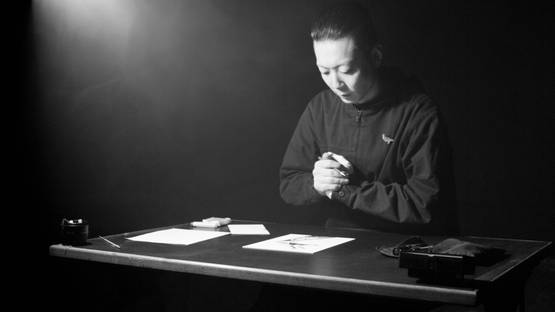 Throughout his work, Shohei Otomo - a Japanese artist and the son of Katsuhiro Otomo who created and directed the famous manga Akira - combines three elements. First is the traditional Japanese art. Never inserting more than needed, Otomo tells the complete story by drawing one character at the time. Second and third aspects are manga styled designs and Film Noir influence. Otomo’s work has a strong eye for drawing manga characters, but unlike his father, his characters are drawn in a Noir fashion. Black & white characters are portrayed with the trouble-luring and cynical attitudes, often showed in their moment of death and glory.

Throughout his work, Otomo combines art, manga and Film Noir

Changing the Oil Paints for a Pen

In Tama Art University Otomo specialized in oil painting, but his life path took him in another direction. During university days, he would often scribble in his notebooks, having more fun with his ballpoint pen than oil paints. As Otomo himself said, he felt less restricted and had more creative freedom while drawing. Another element, which is rather unartistic, was the fact he had no money for oil painting materials. He would survive by doing covers for indie bands and flyers, turning back to oil painting only when he would save enough money. These early works were more direct and erotic than the later pieces which will help him to establish himself as a contemporary artist. As Otomo became more skilled, his work soon began to take a specific form. Doing black & white drawings, they illustrate extroverted, street-like characters. While the foundation of his work is under the heavy East Asian influence, the inspiration for his characters and their personas comes from the western culture, specifically Film Noir.

His multi-cultural influence takes the best from both sides. There’s a specific point where these two sides combine in Otomo’s oeuvre and it’s the approach to drawing. East Asian artists have a tendency to be very precise and instinctive in their work, but they often lack the depth, especially in their character designs. On the other side, Western character artists produce more balanced art, but they suffer from stiffness and the impossibility of showing a more extroverted side of human character. There are borders for everything and artists are scared to cross them because they might create something unpleasant. The aspect where the Western influence overpowers the Eastern is a large number of details. Otomo’s characters are filled with small details which slowly, step by step, create their persona. No words are needed, simply by examining what the characters wears and how they are postured is enough to create their psychological profile.

Characters are filled with small details which slowly, step by step, create their persona

The combination of Western and the culture of Japan can result in intriguing results. It can be noticed in Japanese popular culture, from anime artists such as Shinichirō Watanabe, to the writer Haruki Murakami. When these two sides are combined, as if one negates the cons of the other and only the best of both worlds remains. Otomo has found this balance in his drawings simply by following his instincts and same as for before mentioned people, he managed to create his own originality that surpasses both cultures.

He is represented by Backwoods Gallery in Melbourne.