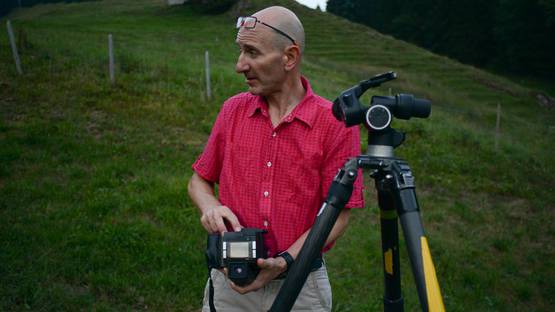 Simon Norfolk is a landscape photographer whose work over the last ten years has been themed around a probing and stretching of the meaning of the word ‘battlefield’ in all its forms. As such, he has photographed in some of the world's worst war zones and refugee crises, but is equally at home photographing supercomputers used to design military systems or test launches of nuclear missiles.

Simon was born in Lagos, Nigeria in 1963 and was educated in England finishing at Oxford and Bristol Universities with a degree in Philosophy and Sociology. Norfolk career has focused on the landscapes of war torn countries. His work show what is left behind in the 'aftermath' of genocide or war. Without the subjectiveness of most photojournalism, these landscapes allow the viewer to draw their own conclusion on the effects war.

He has produced three monographs of his work including ’Afghanistan:chronotopia’ (2002) which was published in five languages; 'For Most Of It I Have No Words' (1998) about the landscapes of genocide and 'Bleed' (2005) about the war in Bosnia. He has work held in major collections such as The Museum of Fine Art, Houston and Deutsche Burse Art Collection in Frankfurt and the collection of the British Council. In 2011, he published 'Burke + Norfolk', a re-discovery and rephotography of the photographer John Burke's pictures from Afghanistan in the 1880s. It was shown at Tate Modern in London, making him one of the few photographers to ever be given a solo show there. He has been described by one critic as 'the leading documentary photographer of our time. Passionate, intelligent and political; there is no one working in photography that has his vision or his clarity'.

In 2004 Simon won The Infinity Award from the ICP in New York and in 2005 Le Prix Dialogue in Arles. His most recent book 'Bleed' about the aftermath of the war in Bosnia, was published in 2005. His work appears regularly in the New York Times Magazine and the Guardian Weekend.