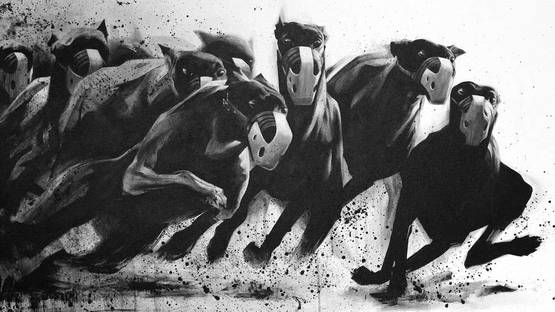 SIT or SIT Haiiro is a Dutch artist who creates intensely bold and visually striking works of art by intermixing elements of nature, death, degeneration and decay with humanistic characteristics. Each image tells a thought provoking story allowing viewers to get a small glimpse inside the mind of the artist.

The work of SIT is inevitably characterized by a feeling of discomfort: his paintings and sculptures show the moment when beauty loses its raison d’être, and presents its darkest side. Behind his figurative images lies a disturbing analysis of our times. SIT demonstrates artificial characters, human beings and animals that remind us of the banality of everyday life, of our obsession with appearance, look and materialism. These characters are the victims of our visual and fast society, the technology of the visible – where human vanity stands in the way of a truly ethical life.

By using black and white, SIT creates sober and melancholic images, as if man – while endlessly believing in progression – has lost something on the way.

But on the other hand he displays a maximum of effects: the fabrics, textures and costumes look sensual and seductive, the settings are theatrical and grotesque. This ambiguity, between the temptation of beauty and our constant urge to abuse her, is the driving force behind SIT's work.

In his 2011 Noir series his work is focused on the magnificent beauty of the beast and the way it is used to serve the vanity that is intricate to humanity. The result is a haunting series that is simultaneously sexy and morbid. The sensual textures of fur and feathers are juxtaposed with pale animal skulls and soft female curves to illustrate the malicious blackness gnawing away at the edges of our sense of beauty.

SIT has been part of the Amsterdam creative scene for many years. He was involved in action painting, graphic design, advertising and more, until he went back to square one to find his true essence, back to “head and handcraft”. Sit has created several series since including Unwired, Sitaki, Drkpnk, Opportunists, 9, and Haiiro.

SIT has participated in many solo and group exhibitions in Amsterdam, New York, London, Stockholm, Hong Kong, Berlin, and Barcelona, among others.