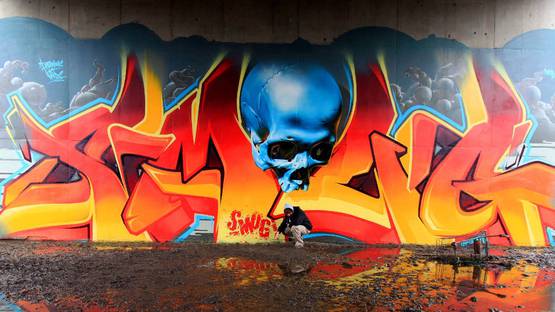 Known for his photo realism graffiti work, Smug, or Smug One, aka Sam Bates, is an Australian contemporary street artist of great skill. Using nothing but spray cans, he was able to gain mastery over a difficult task of making highly technical pieces that are somehow edgy, cheeky, and incredibly playful. In order to recreate absolute realism, artists usually have a lot of time on their hands, tiny and precise brushes, and a quiet work space where no one will disturb them. Those are the three things that none of the graffiti writers have at their disposal, and yet, some of them, Smug being the perfect example, are able to create amazing large-scale wall pieces that look like they could be photographs. There is hardly a compliment of greater significance for any artist attempting to work in photo realism.

Smug – a Master of Graffiti

Generally, he sticks to the photograph that he’s working from, but not everything he does comes straight it. Inevitably, some changes are bound to happen, as there are elements like light and shadows that he simply needs to play with in order to stick them to the wall. More importantly, things that appear perfect in photos can look entirely different when pasted onto a wall – size, texture, the wall itself, and any obstacles play a major role in the final look of the piece. Ultimately, Smug doesn’t even try to copy photos to perfection, since he always adds something personal to it. The more he paints, the less he depends on the source material. As someone who’s more into character, obviously, he thinks and respects the tradition of letter graffiti, considering it to be older than character writing. That said, when he moved onto characters, it seemed as if they were coming to him more naturally than letters or anything he had done before. From the start, his photo realism pieces looked fine, and he’s since been improving his art, eventually becoming one of the most famous street artist in the world. Always enjoying a good laugh, Smug intentionally add humor to his works. He can also create dead-serious works, but those with elements of humor are his favorite ones.

His work looks like it is a photo, but the artist always adds something personal to it

Born in a small Australian town about three hours from Sydney, Smug was always interested in art. The interesting thing is, despite drawing for years, it wasn’t until he graduated from high school that he actually picked up a spray can and began targeting walls instead of book pages. When he was younger, the artist skated and hung around in the streets with his friends, writing their names on the walls and listening hip-hop. Graffiti was a big part of that culture, so everything came into the right place. Asked about his artistic name, Smug states that he doesn’t even remember how he received his. At the time, he tagged using various names, but Smug somehow remained. He still takes inspiration from the friend that he sees regularly, writers that he works with regularly. People that are part of his everyday life are the people that are pushing him to become a better person and a better artist.

Featured image: Smug in front of one of his works
All images courtesy of the artist