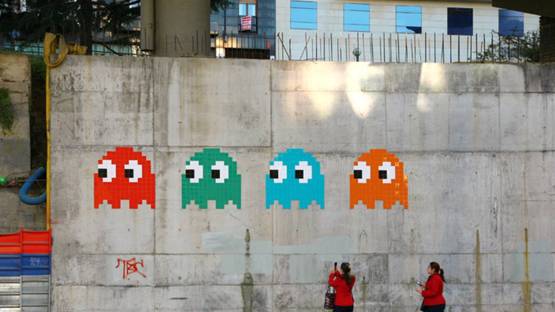 There are many artists that hide their true identity in contemporary times, especially in the domain of street art. The reasons for such an action are varied and though most of them manage to keep their names and characters unknown to the world, their work resonates throughout the streets across the globe. Widely known to the public regardless of his hidden identity, Invader puts up iconic installations in cities around the world based on popular 8-bit video games from the 1970s and 80s. Facing both acceptance and denial by the inhabitants of the places he “invades,” Invader keeps his practice going in the service of the townsfolk, providing artwork that can be seen free of ticket fees.

Invader from the Outer Space

Born in 1969, the well-known French urban artist grew up playing video games and though many kids of today can relate, the games of the time had a “slightly” different visual form. Made with 8-bit graphics that was common of the era, the games influenced the artist to portray the characters present in them in the suitable form of mosaics, representing each pixel with a tile. More than just the subject of his work, the artist’s pseudonym derives from one such game titled Space Invaders, and the artist often goes as far as to state in interviews that he attended a tiling school on Mars (he, in fact, is a graduate of the École des Beaux-Arts in Paris). Placing his works across the streets from Hong Kong to New York, he refers to these postings as “invasions” as he installs various 8-bit characters in publicly visible places.

The Site of Invasion

The biggest project that encompasses much of his artistic oeuvre started out back in 1996 and it includes “invasions” of major cities around the world. Much like in the game version of the story, the first wave of invasion included little recognizable aliens and Invader started out with portraying them in his home city in 1998. The invasion quickly spread across 31 other cities across France and since then, a total of 60 cities in 33 different countries have been invaded by his artwork. Seeing himself as a hacker spreading this 8-bit virus, Invader’s work appeared on 6 of the 7 continents publicly displaying iconic video game characters like Pacman, Mario Princess, and of course, the aliens from the Space Invader.

However, not everyone is fond of the works Invader puts out on certain locations; his own estimate of the works that have been removed from their placements is about 15% of the early placed works. Whether taken down by building owners, thieves or fans, Invader battles the issue by putting his pieces in less accessible positions, high above the ground. Much to the disappointment of both the artist and city residents, the government would sometimes get involved and remove the pieces from certain public places. Regardless, the testament of Invader’s invasion of the world’s metropolises stands to this day and can be seen in subtle residues of the 8-bit virus steadily spreading from the virtual world into reality.

Invader spreads the invasion of mosaical prints through the city streets

Invade at All Costs

Hacking into the city property is anything but an easy job to perform. The pieces Invader puts up are placed there illegally and he’s seen the inside of a jail cell more than once. Believing that the galleries and museums are less than accessible to everyone, he accepts the risks that come with the territory and makes the city his canvas, gifting his work to the people. Though we may not know his name or the look of his face, the pixels of the Invader leave a lasting impression on the viewers across the globe, summing up into a pretty picture.