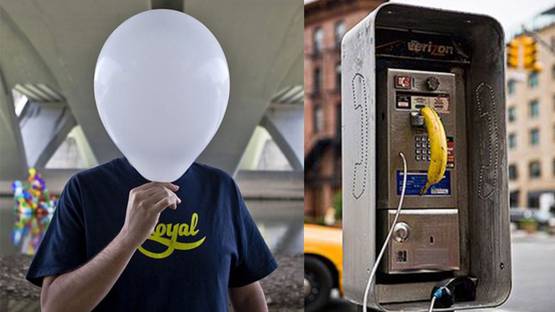 SpY is a Spanish urban artist whose work involves the appropriation urban elements through transformation or replication, commentary on urban reality and the interference in its communicative codes. He has been present on Madrid street art scene since the mid-eighties. Very soon he started to explore a different kind of artistic communication in the street, so he started to work with other forms such as large posters, modified billboards and finally, his famous interventions.

His interventions take form of a word play with the high impact capacity, and are always carefully archived through photography, which helps to keep track of this – willingly unanimous artist. Self-taught artist, SpY was one of the leaders of the Spanish graffiti scene of the nineties, and today he is sometimes even called Spanish Banksy by the press and urban art lovers.  SpY will turn a half pipe into a football pitch, train a CCTV camera on a pile of bricks and replace a public telephone with a banana. In other words, he's an extremely refined prankster.

Even though his art expression evolved to brave contemporary conceptual art, he never gave up his roots – graffiti, as it was for him a school of incalculable value, both artistically and in life. And, above all - especially intensive and prolonged exercise in observation of the urban environment training. His artistic idea and motive is best described as intention to transmit simple ideas in a form of irony. As most of his colleagues, SpY criticizes the society, and in the same time he is sending the message of how to improve ourselves, sometimes even just through words written on the buildings. Words like READ, LOVE and THINK…

Most of his production comes from the simple observation of the city and an appreciation of its components. Where he is a true master is when it comes to exploit the possibilities through a constructive attitude and intervention. His pieces are like pinches of intention, hidden in a corner for whoever wants to let himself be surprised. Filled with equal parts of irony and positive humor, they appear to raise a smile, incite reflection, and to favor an enlightened conscience.

The irony and humor create an open dialogue and suggest that the work communicates something that every passerby can feel identified with. Each intervention requires new procedures, there is no defined method. All parts are presented as a new challenge, from the idea to the location, development, production of the work and documentation.

SpY has been leaving his messages all around the world: France, Italy, Germany, Belgium, Spain, Mexico, Holland, Sweden, Jordan, Egypt, and USA.

Today, he lives and works in his native Madrid.