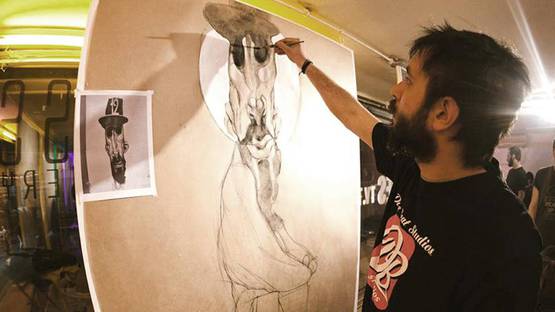 Stamatis Laskos is a Greek street artist, illustrator and painter also known as Sive One, who creates warped portraits of friends and other everyday people (as well as the occasional animals) through highly stylized depictions that are alive with detail, depth and dimension. In his works, which range from canvases of very small dimensions to very large wallpaintings, he draws his inspiration from the contemporary urban art.

Stamatis controls proportions to create a wonderful re-imagining of human anatomy. Laskos, who works in both street art and illustration, creates surreal worlds inhabited by figures with abstracted bodies, bearing elongated limbs and caricature-esque faces with stretched noses and ears. His street art is painted with cool, earthy colors applied with raw brushstrokes. Laskos’s illustrative works, while having less range of color, are still rendered with impressive detail and texture.

Born in Volos in 1985 and studied Painting at the Athens School of Fine Arts (2002-2007) where he was taught by Rena Papasyrou and Marios Spiliopoulos, and graduated with a first-class degree. He has taught in free design workshops (2009-10) and in primary education in Thessaloniki and Volos(2010-14).He also works as a painter with Jordan Nike Inc. an Oregon and as an illustrator of The New Yorker magazine in New York.

Embracing the codes and aesthetics of street art, he progressively moved from a caricatural world towards more symbolic productions. If he continues overstating the points of his characters, this Fine Arts graduated though abandons somewhat irony for poetical portraits where faces step aside in favor of the posture, the gesture, the body and its mise-en-scene. An approach whose the subtleness or mutations can respectively remind of the Polish School, specially people like Sepe, Sainer or Bezt, and the work of Bom.K. This ability to slide from caricature to evocation, combined with his technical background and his creativity, incidentally allows him to regularly practice as illustrator for The New Yorker magazine.