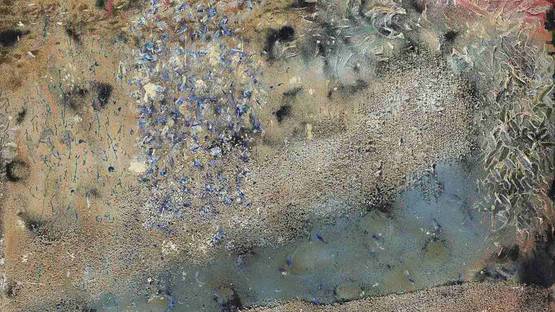 Stanley Boxer was born in New York City, and began his formal education after World War II, when he left the Navy and studied at the Art Students League of New York. He drew, painted, made prints, and sculpted. His work was recognized by art critic Clement Greenberg, who categorized him as a color field painter, a designation which Boxer rejected.

A truly prolific artist, Boxer liked working in different mediums and always thought that one nourished and influenced the other and that all were connected. "In the manufacture of my art, I use anything and everything which gets the job done without any sentiment or sanctity as to medium," he once explained. He shifted from working with figurative imagery in the 1940s and early '50s to abstraction in the late '50s. While his abstraction in the late '60s and '70s was more derived from color-field issues, his '80s works were characterized by lots of thick paint and splashes of color. He often embedded materials such as sawdust, stones, glitter, twine, and netting, producing mysterious depths within the thick, textured, melted and bleeding color.