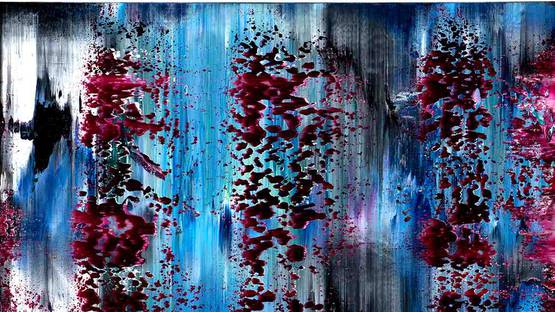 The only place where I find absolute logic is the pure abstraction, says Stanley Casselman in his artist statement. The painter famous for his jaw-droppingly beautiful artworks creates this pure abstraction in the most unusual ways. He paints with large and small squeegees, which are normally tools used for window and floor cleaning. It is already known that squeegees can be used in visual arts and some artists have experimented with them before, but to create a real masterpiece with this tool is a very demanding task. Talented Casselman, however, excelled in it, creating an amazing world of striking abstract patterns.

Casselman was originally a sculptor, working with clay as a student in Claremont, California. It was his ceramics professor who told him to try painting, probably because he recognized Casselman's natural inclination towards painting. But at that time, no one knew that Casselman was going to develop his own style which is beyond painting and sculpture. The artist's familiarity with textures carried over to his approach to painting and he started creating artworks with the unique tactile quality. Casselman used to work with rubber and metal edged ribs while processing clay and he intuitively applied the similar technique in his paintings. In order to process clay he manipulated mini-squeegees, but for large-size paintings, he needed to learn how to manipulate a giant squeegee in order to reveal or hide multiple layers of paint.

The story about Casselman's arriving in the limelight of the abstract art is even more interesting than his squeegee technique. Casselman was following the major events at famous auction houses and he heard about an awkward challenge proposed by an art critique from New York called Jerry Saltz. An artwork by famous Gerhard Richter was sold at auction for  $34.2 million and Saltz challenged young artists to produce a painting that is similar to Richter's work. In case such painting was of outstanding quality, Saltz would pay $155 for it and start to collaborate with a young artist. Casselman was very intrigued by this offer but at the same time frightened by the idea of copying Richter. Yet, he couldn't pass the offer and decided to spend some time trying to understand the hidden language of Richter's masterpieces. In the end, he succeeded in winning those $155 and Saltz even wrote a story on Casselman in New York magazine.

What is really amazing about Casselman’s paintings is that they started off as Richter’s copy and ended up transcending the original source of inspiration. Not only in the technical sense - Casselman's work has been very well received and now it sells even above Richter’s regular fare. Casselman has developed extremely precise painting technique and he works almost like an architect, with the detailed plan for structure and layering of his painting. This kind of architectural planning concept wasn't visible in Richter's work, which has more of an uncontrollable, wilder atmosphere. Casselman, on the other hand, isn't keen on the excessive randomness and loves to be in charge of his colors and lines.

Casselman is a very active artist - not only that he's having numberless solo and group exhibitions, but he's also creating new art all the time. After his most famous series of work called Inhaling Richter, he kept on painting in the similar style and produced a magnificent series called Luminor, which is probably the most breathtaking art he has ever created. The textures and colors are almost terrifyingly rich and complex. When looking at Luminor pieces, it is hard to believe that they are real paintings and not digital art.

Casselman is a brave artist who accepted the challenge to decode the abstract language of Richter, one of the most eminent abstract painters of the 20th century. Not only that Casselman succeeded in this task, but he reinvented Richer's style and found his very own approach to abstract art that is now highly esteemed by art critiques and art dealers all over the world.