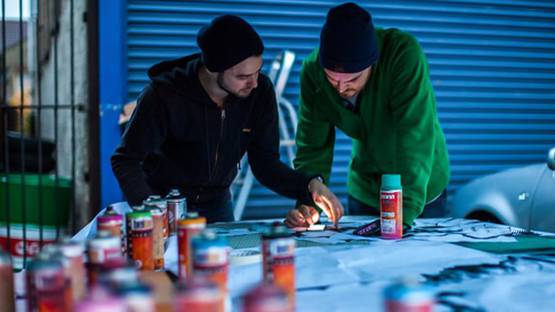 STATIC is the creative output of London-based image makers Tom Jackson and Craig Evans who have been producing limited editions and original works since 2006. They are a design collective that draw on their combined exposure to all forms of art and design, media influences, everyday life and social and environmental influences. Their work combines elements of street art and fine art, creating a clean graphic style through the talented application of stencils, spray paint, screen-printing and paint brushes.

Static is made up of two art school friends, Tom Jackson and Craig Evans. Following their meeting at art school, they went their separate ways and pursued degrees in Liverpool and Edinburgh. Reunited, they returned to the North East to form STATIC and open their first studio in 2006. They have been printing, painting and pasting all their work in-house to maintain a consistency of output and directly influence the decision making processes that go into each idea, original artwork and edition they produce.

The style of STATIC

The work of STATIC is recognizable for its blend of graphic and patterned imagery created through a combination of screen printing and mixed media techniques. STATIC’s work is constructed from found visual imagery as well as symbols and signifiers from modern culture which they continue to apply to a wide range of surfaces, including wood, metal, perspex and glass. The duo specialize in limited edition prints and originals, all of which are created by hand. A lot of their work goes through a process that involves image manipulation and creation on the computer and then it is either cut as a stencil by hand or made into a silk screen.
STATIC find great inspiration in contemporary revolutionary actions at all levels of society, particularly riots and strikes. The Chinook Chandelier is one of STATIC’s most recognizable images to date. It was created in response to the Ministry of Defence’s £500 million purchase of 8 useless MK3 Chinook helicopters. “It’s not about being remembered, for us it’s about our work making an impact right now”, the duo states.

Work by Static can be found on the streets of London as well as exhibited in galleries across the UK, USA, Japan, and Australia.
Since 2010, STATIC have been producing layered glass works which have been exhibited in the UK, Japan, Singapore, Italy, the US, India and Russia. In 2013, a selection of pieces from their Phantasms of the Living show was added to the private art collection of the Saudi Arabian Royal Family and in 2014 they were commissioned by Activision to create a unique Camo pattern for the release of the new Call Of Duty AW game launch.

STATIC is currently based in London.