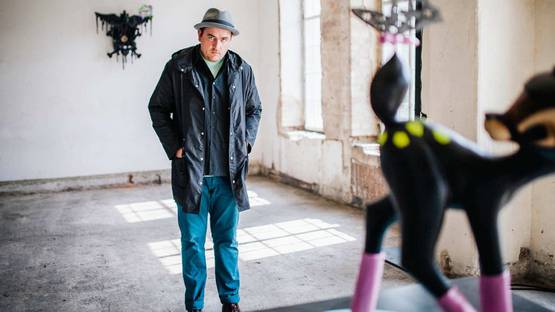 Stefan Strumbel is a German artist, born on May 17, 1979 in Offenburg. He made a name for himself by exaggerating traditional and cult artifacts such as cuckoo clocks, anchors and crucifixes and reincorporating elements of Street Art and Pop Art.

He replaces significant elements of the cuckoo’s clock, such as traditionally carved ornaments with motives that deal with the subjects of violence, pornography and death. By doing so, he puts the objects into a completely new and often provocative context, always pushing boundaries. At first sight, these objects don’t reveal any of the disturbing content but appear as beautifully crafted wooden sculptures. With their colorful and bright surface, the artworks appear as light and shiny pieces of Pop Art. Strumbel, however, creates both, a unique artificial and artistic aesthetic with his usage of extreme exaggerations in regard to form content. Another key aspect of this work refers to the concept of Heimat. A German word that cannot be entirely translated one on one but loosely refers to heritage or home. Strumbel raises significant identity questions with his work: How do I define Heimat? How do I perceive myself? How do I project myself to the outside world? How and through what do I define myself? With his art, Strumbel initiates a change in social values: Traditional ideals, clichéd notions of home and the reality of the individual are dissolved and transformed into an aesthetic that becomes an allegory of social status symbols. He exposes the mechanism of a society that in its desire for status and the pursuit of consumerism surrenders to the constant attraction of the media. With his transformed objects, Strumbel successfully creates an illusionary world, which reflects societies real maladies. In the German village of Goldscheuer, the artist reconstructed the interior of the built in 1962 Catholic Church Maria, help for the Christians. Strumbel approached the church with the idea of a completely modern intervention. After initial skepticism towards the project, he soon owned the support of the whole town community. Even Pastor Thomas Braunstein praised Strumbel’s work as “a gift from heaven”. The re-opening of the brand new designed Church on the July 1, 2011 was recognized throughout all media platform. Leading print media such as Der Spiegel and FAZ published articles about the 6 meters high Madonna dressed in traditional Black Forest clothing, enthroning with her infant Jesus above the entrance. Funky stripes beautifying the choir wall, LED light shining on speech bubbles and comic-book elements, all innovatively adorn the Catholic Church. The New York Times recently commissioned the artist to design the cover of the their magazine.