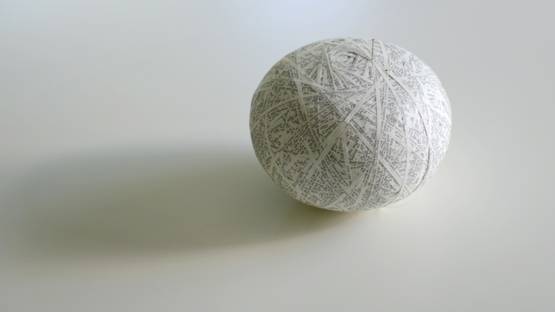 An Irish visual artist, Stefana McClure focuses on discrepancies in translation, fascinated by the gray area that exists between languages and cultures. Her process of translation involves transforming text and printed materials into sculptural objects, often through laborious processes like knitting, cutting, wrapping, and tracing.

Born in 1959 in Lisburn, Northern Ireland, Stefana McClure grew up in Belfast during "the Troubles", an ethno-nationalist period of conflict in Northern Ireland that lasted about 30 years from the late 1960s to the late 1990s. This has much influenced her work. She graduated in 1984 with a BA in Sculpture from Hornsey College of Art in London before moving to Japan for twelve years. There she completed post-graduate studies in paper making at Kyoto Seika University having won the Monbusho Scholarship. From there, she moved to New York. She exhibited in a range of venues, including Arróniz Arte Contemporáneo, Mexico City, Bartha Contemporary, London, Sleeper, Edinburgh, Scotland and Josée Bienvenu Gallery, New York. Her work is included in museums and public collections across the US, Germany, Austria and the United Kingdom.