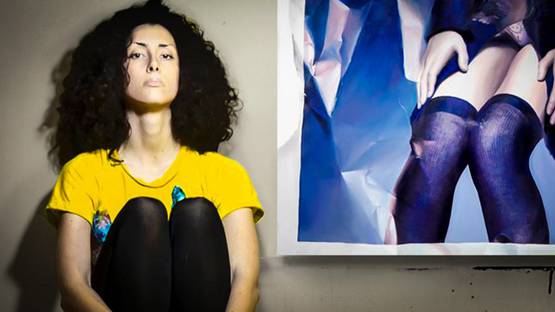 Stefania Fersini is an Italian painter, born in 1982 in Aosta, Italy. Known for her photorealistic style, she creates mirror-like, creased images of fashion photography and models, symbolizing rejection and society's often unneeded and growing consumption.

Fersini studied at the School of Art in Aosta, and afterward graduated in industrial design at the Architecture College in Turin, Italy.

Her current series, which is also her signature work, consists of a series of paintings, portraying fashion models. The enlarged fashion pages bring back to real scale the characters and the scene, creating a parallel world made of models, scenarios, icons of our society. As in front of a mirror, viewers recognize the reflection they aim to identify with, the objects of desire for vast majority. Magazine papers picked and recycled from rubbish, marked and warped, divert the attention from the scene. Models displayed in fashion magazine, paid to be beautiful and to be one’s craving lust, are aged by paper wrinkles and disfigured by cuts and areas of light. Representing consumerism and appearance, the values and myths of nowadays society, each of Fersini’s paintings consist the products captions, as in actual fashion magazines, alluding to the idea that in our present time, everything is for sale.

Continuous change of perception in her paintings is produced by the contrast between the depths of the depicted scene and the surface of coated paper, with its twists and reflections. This continuous sway of perception induce a personal reflection, a hypnotic effect that allows the observer to switch from conscious to subconscious. Every painting becomes a small individual quest of finding and realizing the complexity of individuality, in relation to these depicted models and values in capitalist way of living. Paintings are subjective critique of a world that needs to market before consumption.

Intentionally impersonal, Fersini’s work is her aim to be the mirror, in control of composed scene, atmosphere and emotion she gives to the viewer.
'I’m fed up of going fast, tired of the excesses and superficiality. I need to paint to slow down. I take time off, to meditate, to contemplate beauty, where there is some. I copy because the solution to excess is not to create 'new'. I copy like a mirror, because reflection is my choice', as Fersini states.

Fersini is currently a part of collective of artists and designers, called Nucleo. Founded in 1997, Nucleo is a collective of four artists, Piergiorgio Robino, Stefania Fersini, Alice Carlotta Occleppo and Alexandra Denton. This interdisciplinary team is active in the field of contemporary art, design and architecture. The name of the studio is a synonym for research, innovation and introspection, whose quest is to find a connection between art and design in their work. Nucleo aims to convey identity, history and interlacing time frames as themes for their projects. Working in three-dimensional, architectonic forms, their work is characterized by the perceptible quality of the material and its effects on the objects. Over the years, Nucleo’s design has been exhibited worldwide.