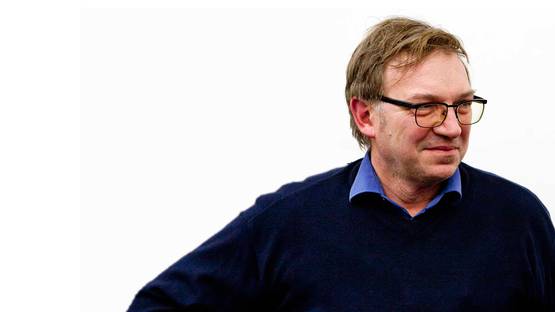 Stephan Balkenhol is a German contemporary sculptor, best known for his representational works carved out of wood.

He was born in Fritzlar (Hesse) in Germany. He has been concentrating on the human figure for over two decades, began his sculptural process of figurative wood carving in the mid-eighties – as a response to the abstract, minimalist and conceptual approaches of the Hamburg School of Fine Arts where he studied from 1976 to 1982 under Ulrich Rückriem. His first figurative wooden sculptures from 1983 of a larger-than-life naked man and woman placed the human figure at the center of his work and reintroduced the figure to contemporary sculpture. In the 1990s he added animals and hybrids, and more recently architecture to his artistic vocabulary. His practice also comprises drawings and photographs.
The artist uses a hammer and chisel to gouge his figures out of the tree trunk, leaving the shavings and traces of the tools visible in the wood with its knots, grain and cracks. Balkenhol uses a variety of woods, including poplar and Douglas fir, and crafts his works out of single blocks of wood using hammers, power saws, and chisels. He then uses paint to structure the sculpture and accentuate the anatomy, in no way heightening the figure’s expressiveness.

Balkenhol has been representing contemporary figures, either as free-standing sculptures or reliefs in wood, of the everyday man or woman in order to strip them of any narrative content and onto which the viewer is able to project his own image.

In the mid-1980s, Balkenhol began taking on commissions for outdoor works, and, as part of a noteworthy display, he installed two of his sculptures on London’s River Thames by placing one on a buoy and another near Blackfriars Bridge. While some of Balkenhol’s early works were nudes, he began rendering them in plain clothing—most often white shirts and black pants or plain dresses—in order to avoid any unintended allegorical interpretations.

Balkenhol’s totem-like sculptures, which are reminiscent of Folk Art and recall medieval carving techniques, expand the traditional role of the statue by featuring everyday people rather than celebrated historical figures.The sculptures, often representing men, women, and animals, and featuring serene, expressionless faces, have been interpreted as an exploration of the relationship between the figures themselves and the spaces or locations they occupy.