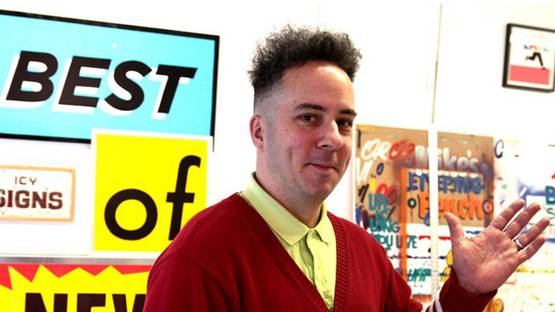 Stephen Powers is a New York based artist who used to write graffiti under the name ESPO, just to become a full-time studio artist in 2000. Using the iconography, lingo, and techniques of vintage, hand-painted signs, his art speaks the language of advertising while simultaneously subverting it.

Powers grew up in Philadelphia where he took classes at The Art Institute of Philadelphia and the University of the Arts, but as he says - he actually attended university of the arts on broad street in Philadelphia. In 1994, he moved to New York where he soon got associated with the DIY, punk-inspired "beautiful losers" crew, which included artists like Margaret Kilgallen, Mike Mills and Barry McGee. Powers got his start in the East Coast graffiti scene under the name ESPO, or Exterior Surface Painting Outreach. He used to paint in daylight, wearing street clothes; so when passersby asked what he was doing he would tell them, "I'm with Exterior Surface Painting Outreach, and I'm cleaning up this gate"; the official-sounding name, and clever acronym was enough to ward most people off.

After stints as publisher of On the Go Magazine, author of the book The Art of Getting Over, and full-time graffiti writer, Powers opened his studio in January of 1998.

He once said that graffiti is far from pointless - It is an adventure that employs innovation and critical thinking skills all in one stylish line. What he does is taking the form of the murals, powerful by itself, but for all the wrong reasons, as the artist believes, and trying to retain some of the power and use it in a really good way. ESPO's work often blurred the lines between illegal and legal. For example, pieces like "Greetings from ESPOLand" utilized the style of the Asbury Park Billboards and appeared to be a legitimate billboard.

In 2005, he organized the Dreamland Artist's Club, a project that allowed professional artists to help Coney Island vendors by repainting their signs (over 45 artists participated). The idea was to bring back the tradition of sign painting, something that already inspired Powers to set up the ICY Signs Shop in Brooklyn in 2003, together with Justin Green, Matt Wright, Lew Blum, Dan Murphy, Alexis Ross, Sean Barton and Mike Lee.

A Love Letter to the City is the book Powers launched in March 2014.The book takes a closer look at the processes behind Powers' love letter murals around New York. The book also contains sketches and stories from Powers' about his experience in the graffiti and street art scene.

Stephen Powers is recipient of the Fulbright Prize and his murals are spread across the globe, from Belfast and Brooklyn to Johannesburg and São Paulo. His work has been shown at the prestigious Venice and Liverpool Biennials, as well as numerous shows at New York, at the Academy of the Fine Arts as well as The Institute of Contemporary Art in Pennsylvania, San Francisco, Copenhagen, Brussels, Milan…