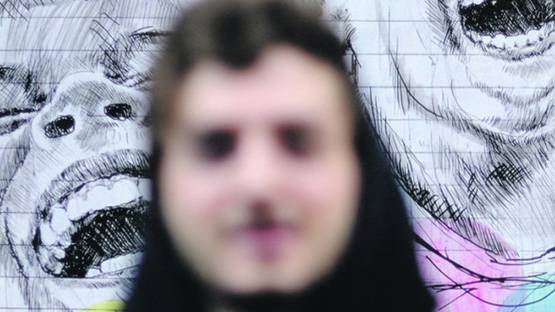 Greek street artist STMTS(Stamatis) is best known for the politically and emotionally charged, large-scale drawings of children he wheat pastes on various public buildings throughout Athens.

He was born in 1993 in Athens. He is currently studying at the Athens School Of Fine Arts.

Of his own motivations, the artist says: “I care about the social problems and more specifically about the kids and the new generations. The political circumstances affect all the problems of society, so they possibly also affect my work and inspiration.”

Beginning with a lengthy pre-planning process in the studio in which he makes repeated sketches of his subjects, he then takes the completed work to the street for pasting. STMTS deliberately chooses old and dilapidated walls for his work to draw the attention of spectators to the physical and economic conditions surrounding the work.

Children are his favorite subject, the “super-heroes” carrying his message to the world; they represent the forgotten innocence and the authenticity we all kind of loose while growing up, reminding us in so many words the essentials of life, the naïf person that we used to be and the emotions of our childhood. Stamatis’ super-heroes speak about social problems (he doesn’t want to get involved in politics as he doesn’t trust politicians, but he doesn’t believe in violent riots either: all he cares about is making people conscious of social issues) and human conditions: if his characters are cute, it isn’t for cuteness’ sake.   Stamatis loves Toulouse-Lautrec, Rembrandt and Dalì, but also fellow street artists such as Blu, Roa and the Greek artist Alexandros Vasmoulakis.

Stamatis lives and works in Athens.