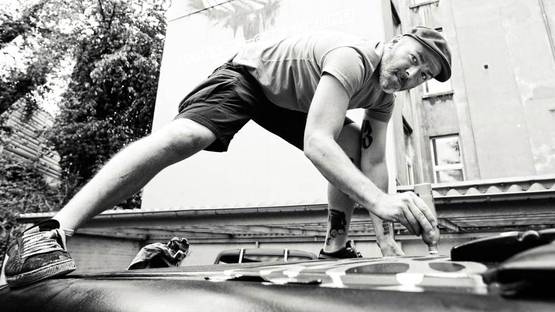 Born 1973 in Schwäbisch Hall, Germany. Lives and works in Berlin, Germany.
Stohead’s puristic form of graffiti, tagging and throw ups is a form of contemporary calligraphy. Highly visible focused on these handstyles that once leaded him to this artform, his latest works are martial typographic textpatterns of lyrics by rap actors and punkrock bands he grew up with. They often transport sociocritically content in an abstract way.

Stohead started tagging and painting his first pieces in 1989. As a classic graffiti writer he lived in various cities all over the world with a longer stay in Hamburg.

In 1999 Stohead joined the artist group "getting-up" with who he realised some of the biggest graffiti murals and exhibitions in the early stages of the new century. At that time he also started his studio work which brought him to work as a gallery artist and freelance illustrator.

Stohead’ s art refers to a very puristic form of graffiti, tagging and throw ups. As a highly visible writing form on walls in most urban surroundings for the artist graffiti writing represents a strongly influential form of contemporary calligraphy.

Stohead’s latest works are martial typographic textpatterns of lyrics by rap artists and punkrock bands he grew up with. They often transport sociocritical content as abstract interpretations.