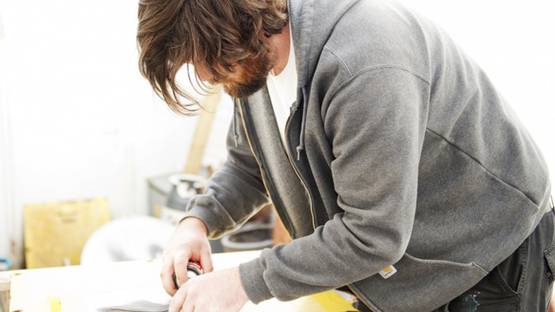 Anders Gjennestad, aka STRØK, is a talented stencil artist from Norway. He mainly works on the streets, but his indoors multi-layered artwork has been exhibited in many galleries around Europe. His works are done with utmost perfection when it comes to details, and he carefully makes each piece using his own photographs as inspiration. When he photographs, he usually chooses a black and white method. His stencils are highly detailed, as he thoughtfully makes them by hand and plans them in advance. He adds multiple layers to his work and recreates the photographic visuals on the stencil surface.

Relevance of Texture and Placement

Anders Gjennestad was born in Arendal, Norway, in 1980 and he is a self-taught artist. He currently lives in Berlin, where he creates most of his street art, but he exhibits and paints all over the continent. What he does now, he achieved by the combination of hard work and dedication. In a search for inspiration, he wanders the city, looking for the abandoned factories and unoccupied houses. When choosing materials, he considers how well they will age, survive various weather conditions, and how will their texture degrade over time. The incorporation of all these characteristics gives his stencils a unique property.

Anders Gjennestad creates most of his street art, but he exhibits and paints all over the Europe

Choosing not to Obey the Laws of Gravity

STRØK's theme includes subjects that seem to inhabit an alternative universe, where there are no familiar laws of physics. The characters do not follow the laws of gravity, and they are often portrayed upside down, inhabiting the factory walls and complementing their aged surface. In a dimension where his characters exist, there is no time, nor rules. Gjennestad's stencils are placed on scratched walls, rusted metal, and degrading plaster-work, creating an interesting texture. The spontaneous transformation that happens over time, emphasizes their complex character.

Gjennestad's characters inhabit an alternative universe, where there are no familiar laws of physics

Interaction with the Viewer

The artist often chooses not to tag his work. By choosing not to sign his work, he states out that the street art belongs to everyone. His mission is to share the artwork, to send a message and leave a trace, that does not necessarily have to be associated with his name. His stencils rely on the interaction with the viewer, and their relation with the surface they are on. However, his gallery work is always done under his name. Anders Gjennestad mindfully chooses the materials and the placement for his stencils, giving his subjects a unique ability to interact with space.

The artist is represented by Mathgoth Gallery.