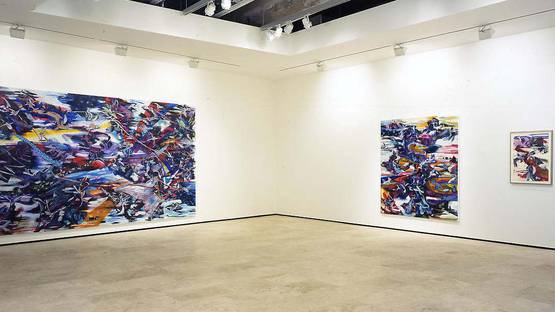 Suling Wang, born in Taiwan in 1968, is an internationally recognized painter and contemporary artist, known predominantly for her large-scale abstract works. Her compositions are characterized by sweeping strokes of bold colour that flow in and out of the visual field, resulting in a dynamic synthesis of painting and drawing. She moved to London in 1993, receiving her B.A. from Central St. Martins College of Art and Design, London in 1997 and an M.A. in Painting from the Royal College of Art, London in 1999.

The cartoon-like and calligraphic forms in Wang’s paintings are overlaid atop others and suggest trees, stems, and mountains. The imaginary settings with meticulously detailed layers are rhythmic and explore her sense of uncertainty relating to her identity within Eastern and Western cultures. The geography of Taiwan is a recurring theme in Suling Wang’s paintings and her depictions are influenced by oral traditions and Daoist philosophy she experienced as a child in rural upbringing.

Her work has been included in many solo and group exhibitions worldwide, including at Utah Museum of Fine Arts, Salt Lake City, Pekin Fine Arts, Beijing, Museum of Fine Arts, Houston, Santiago de Compostela, National Gallery, London and Kunsthalle Mannheim, Germany, among others and it is in the permanent collection of major museums including the Cincinnati Art Museum, the Museum of Contemporary Art, Los Angeles, the Pinchuk Art Collection, Kiev, Ukraine and the Solomon R. Guggenheim Museum, New York.

She currently lives and works in London, UK.