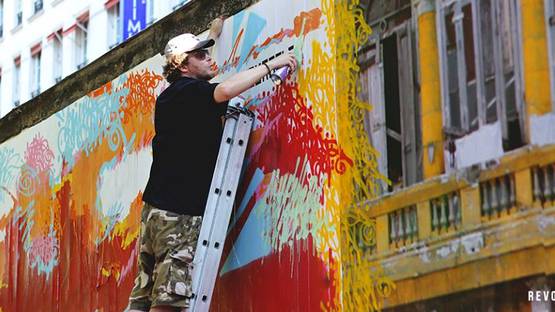 Jonas Bournat a.k.a. SUN 7 is a French artist, famous for translating calligraphic imagery and techniques from street walls to fine arts. With his unique visual and pictorial language, he is able to question people’s reality, revive memories and make them eternal. The focal point of his art has always been graphics and glyphs, which he represents so cleverly in order to draw viewer’s attention. Throughout his creative process, he has favored raw, spontaneous, and pure energy that leave a special impression, and can be seen in each of his art pieces. He uses different effects such as ejections, casting, fusion, and conflagration to make motifs that evoke certain telluric and geological manifestations.

SUN 7 was born in Paris in 1977. Since he was a teenager he began to explore graffiti. In the early 1990’s he discovered New York tag culture, took spray cans in his hand, and soon started making graffiti on the walls of Paris, but also moved on to making installations and performances in Lyon, Marseille, and over the sea in Shanghai, Hong Kong, and Djakarta. His father’s stroke was a turning point in artist’s career, as he began to immortalize the events of the past. The influences in his artworks come from oriental illuminations, pop art, American writers, Latino tattoos, and action painting, though Arabic calligraphy remains dominant. By combining a mesh of words, and a lace of letters, Jonas makes portraits and self-portraits that create a play of appearances and disappearances.

By combining a mesh of words, and a lace of letters, Jonas makes portraits and self-portraits

Bournat is a master in crossing image and word, color and poetry, street and art. The use of canvases, metal plaques, and signs allow his installations and performances to capture the moment of spontaneity and self-expression in the form of live art. SUN 7 is known for applying dense calligraphic forms and shapes, as a sort of typographical gridding that helps him distinguish the gold and chrome portraits, to which he gives a lot of attention. Coded texts and ideograms look so unreal that they introduce the audience to the world of deep interest and mystery. Large ornamental pictorial surfaces leave strong effect that looks as if they are going to spill over the defined lines.

SUN 7 is known for applying dense calligraphic forms and shapes

Jonas uses his artistic name SUN 7, which is read in French as sun-sept, a pun for “sunset”. He often includes astral and solar events like volcanic eruptions and ejection of eruptive materials to show processes that occur on the surface of the sun. There is a big similarity between his art and his pseudonym. The decision to turn from street to fine art has opened him the doors of galleries and museums around the world. His pieces have been exhibited at the Grand Palais, Fondation Cartier, Espace Louis Vuitton, and Palais Tokyo in Paris among others.
He is represented by the Galerie Perahia.

The artist lives and works in Paris, France.