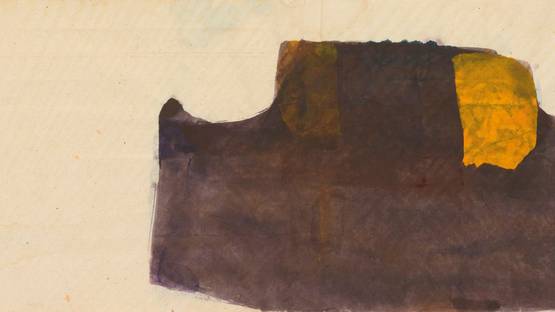 Suzan Frecon is an American artist, internationally known for abstract oil paintings and watercolors that are at once reductive and expressive, and critically acclaimed for sensitive arrangement of color, form, and texture.

Frecon was born in 1941 in Mexico, Pennsylvania. Following a degree in fine arts from the Pennsylvania State University in 1963, she spent three years at the National School of Fine Arts in Paris.

For the past four decades, Frecon has become known for abstract oil paintings and watercolors that avoid facile explanations or recognizable visual associations. Her abstract forms may invite associative leaps to architectural or art historical references, as she has cited her interest in varied art historical sources such as the Chartres Cathedral, Minoan labyrinths, Byzantine painting, and Pomo baskets, but ultimately, the works remain non-referential.

Instead, composition works with color, with surface, and with light to create an abstract visual reality that she intends to exist solely on its strength as art. In a deliberative and searching process, she works toward painting that provides a complex, powerful, and inexplicable experience for the viewer. As she has stated, ‘The physical reality and the spiritual content of my paintings are the same.’ The changeable and creative relations of sunlight to color, material, surface, and composition is integral to the painting as ongoing visual experience, capable of being seen in maximum possible dimensions.

Each work is the result of a thoughtful, laborious process in which the artist sketches and revises a composition, usually evolved from previous works. From color, Frecon builds a composition rooted in geometric and volumetric proportions and precisely defined spatial relationships that incorporate asymmetry as a generatively unpredictable visual element. However, at times she will also develop color and composition together, varying colors and surfaces to achieve often great contrasts of immediacy and radiance.

She derives her color palette from pigments ground in oil, particularly earth reds, the resonant vocabulary of which she explores in shifting degrees of matte and sheen, surface and depth, positive and negative. Her almost tactile use of color heightens the visual experience of her work, and depending on the light source and viewing angle, different perceptions emerge.

Frecon has exhibited widely in the United States and internationally. She has participated in a number of group exhibitions such as the 2000 and 2010 Whitney Biennial. Permanent collections which hold works by the artist include The Art Institute of Chicago, Fogg Art Museum, Harvard University, Cambridge, Massachusetts, Kunstmuseum Bern, Switzerland, The Museum of Modern Art, New York, National Gallery of Art, Washington, D.C. and the Whitney Museum of American Art, New York.