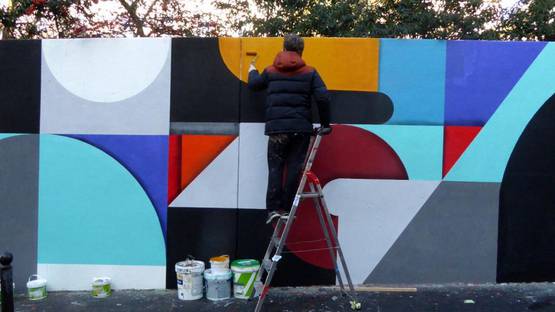 Swiz is a French artist, working both on the streets and in the studio. His preferred canvases are walls of abandoned places and streets in Paris suburbia. Whether he uses spray paint or acrylics, the visual experimentation has led Swiz to develop a style that echoes the great Futurism movement. The artist deconstructs the words, ties and unties them enough to create alphabetical matter. And like in a clever game made of facets, all you have to do is focus on one of his works to find the combination and decipher the message it conveys.

Beginnings in the City of Light

Born in Paris, Swiz began painting graffiti in 2000 without any art education. He spent a few years painting abandoned places. Walking on the streets of the French capital and exploring no-man's-land, everything became an opportunity for the artist. So he grabbed it, transformed those places into his own playgrounds and created a visual password left for the viewers to figure out. Talking about his early graffiti memories Swiz says: "As every graffiti writer, I had good and bad experiences. I now think that painting outside is something natural and a sane reaction to the city. What is more important for me is to keep on painting in an evolutive way with open-minded people."

For Swiz, painting outside is a natural reaction to the city

Echoing the Bauhaus, his letters are playfully juxtaposed, creating a unique style based on the logics of the mathematics of shapes, or even of words. Playing with words and typographic rules, Swiz's letters turn into shapes that divide and overlap, creating a sort of a jigsaw. He is consistently working with letter forms, creating some of the most progressive and interesting graffiti aesthetics. The disorder of abandoned places gave him the urge for an organization, or rather the desire to confer a meaning to his work.

Swiz described his visual style by saying: "I rarely use spray cans in recent years. Even when I paint traditional graffiti in the streets, I use paint and rollers, because it's cheaper and non-toxic (and people think it's legal!) . That led me to learn how to use different tools and create my own colors, and not be dependent of a brand's color-chart. Even if my studio work is based on a precise geometric way to encrypt letters, I never paint with a sketch. I sketch my paintings directly on the medium, one line leads to another one and I never know where this line will end. It is the same process for colors, one suggests another one."

The artist is represented by several galleries, including Mmartproject, David Bloch Gallery, and 44309 Street//art Gallery.

Swiz lives and creates in Paris.