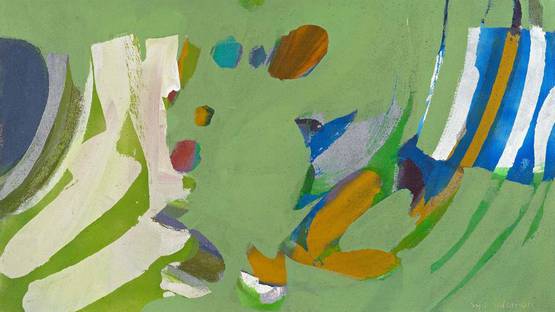 An American abstract artist, Syd Solomon is best known for works illustrating his fascination with the climatic and overall environmental conditions of land, sea, and sky. He described himself as Abstract Impressionist, alluding to the fact that his work infused impressionism into the processes, scale and concepts of Abstract Expressionism.

A successful camouflage designer during World War II, Solomon incorporated this experience into his painting. Prior to D-Day, the Royal Engineer Camouflage Corps invited him to join them in London, where he mostly performed aerial reconnaissance. Learning to see from a completely different vantage point, this experience inspired his ideas of abstract art.

At the end of the War, he attended the École des Beaux-Arts in Paris. Experimenting with synthetic media in the late 1940s, he was recognized by Victor D’Amico, the first Director of Education for the Museum of Modern Art, as the first to use acrylic paint. In 1946, Solomon moved to Sarasota, Florida, a move that greatly influenced his work. Inspired by climatic factors, his canvases reveal a fascination and concern for Florida’s aquatic environment. Works produced in this period often involve nature, the beach, wind, the shoreline and more.