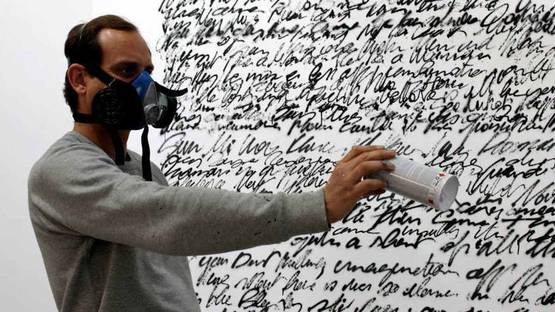 Tancrède Perrot aka Tanc is a French artist born in 1979 in Paris. His work is characterized by the uniqueness of his style, which is better understood acknowledging Tanc grew up as a graffiti artist. He sees street art as ephemeral, and that the creative process matters more than the result itself. To him, being an artist means embracing a certain way of life: to be fully committed, and show absolute integrity.

At the turn of the century, he mainly focused on studio work. His exploration of the possibilities of the line allowed him to immediately stand out from the usual graffiti artists. His work strives towards synthesis of his name, of tags, of individuals, of music, of life. His work does not seek perfection, but spontaneity. The artist’s state defines the work’s density and its precision. His heart beat activates his arm like a metronome: the artist is not trying to control this flow, but rather understand the composition that suddenly appears on the canvas, perfect balance between consciousness and unconsciousness. He appends his signature on his canvasses as he used to do so on the walls with his graffiti since his teenage years. This discipline is above all an instinctive outlet for a need to express himself: he takes over the urban space and shouts his name across the city.

But soon the letters disappear and Tanc starts exploring formal abstraction. By focusing his work on line and color, he regenerates the pictorial tradition by confronting it with street art's essential vitality: prevalence of action, perfection of the gesture, acceptance of the unexpected, and expression of a strong singularity.  Action, energy, and the artist’s emotion thus aim to touch the viewer in a sensual, intimate and immediate way.

Tanc has exhibitions in France regularly, but his work has gained international prominence with exhibitions in Germany, in the UK, Morocco, or New York.