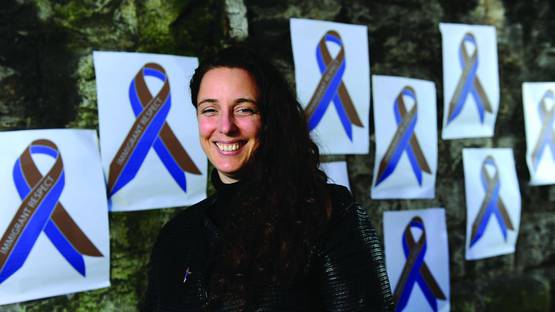 Tania Bruguera is the (in)famous installation and performance artist from Cuba, whose groundbreaking work is focused on the issues of power and control.  She was born in 1968 in Havana, Cuba and studied at the Instituto Superior de Arte in Havana, after which she earned an M.F.A. in performance from the School of the Art Institute of Chicago.

Bruguera's work pivots around issues of power and control, and several of her works interrogate events in Cuban history. Her 1998 work The Burden of Guilt (El Peso De La Culpa) was the artist's take on a story that indigenous people in Cuba vowed to eat dirt and nothing else rather than be the captives of the Spanish conquistadors. Bruguera interpreted their act of eating dirt as "a weapon of resistance." In her performance, Bruguera stood naked, with a lamb carcass hanging from her neck, creating both a physical and symbolic burden. For 45 minutes, she consumed soil mixed with water and salt representing tears. As Edward Rubin described it, "The harrowing piece was first performed in Havana, where the audience was duly reminded that freedom, liberty and self-determination are not abstract ideals, but achievements that deeply inscribe their meaning on our physical being."

In March 2009, she had a performance at an arts center in Havana that has been involved in controversy. During the performance Bruguera put up a microphone and told people in attendance they could say whatever they wanted for one minute. Many of the attendees used the opportunity to ask for “freedom” and “democracy”. The Cuban government denounced this in a statement saying that it considered “this to be an anti-cultural event of shameful opportunism that offends Cuban artists and foreigners who came to offer their work and solidarity."

From 2003 to 2010, she was an Assistant Professor at the Department of Visual Arts of The University of Chicago, United States and a visiting professor at the University IUAV in Venice, Italy. In 2011, Bruguera began working on Immigrant Movement International. She started this project by spending a year living in a small apartment in Corona, Queens, with five illegal immigrants and their children. She was interested in experiencing some of the problems illegal immigrants encountered trying to survive on low pay and without health insurance. The project, funded by the Queens Museum of Art and a nonprofit arts group called Creative Time, also involved opening a storefront in New York where Bruguera wanted to hold arts workshops for immigrants, but found that most of the people who came to the store were interested in learning English or needed help finding employment or legal aid. As part of this work, Bruguera has launched an Immigrant Respect Awareness Campaign and launched an international day of actions on 18 December 2011, which the UN has designated as an International Migrants Day, in which other artists will also make work about immigration.

In 2012, she presented Surplus Value, a participatory work as part of the Immigrant Movement International. In order to enter Surplus Value, museum visitors waited in a long line, and some were randomly allowed to enter, while others were submitted to lie detector tests asking about their travel history. The exhibition space contained four reproductions of signs from Nazi labor camps.

Bruguera has participated in numerous international exhibitions, including Documenta 11 in 2002, the Bienal Iberoamericana in Lima, Peru in 2002, the Istanbul Biennial in 2003, the Shanghai Biennale in 2004 and the Gwangju Biennale in 2008. Her work is also held in the permanent collections of many institutions around the world, including the Museum of Modern Art and Bronx Museum of the Arts in New York and the Museo Nacional de Bellas Artes de La Habana.

On January 2, 2015, she was freed after having had three back-to-back detentions in three days, and after over a thousand artists worldwide signed an open letter to Raul Castro calling for her release. She currently lives and works between Chicago and Havana.