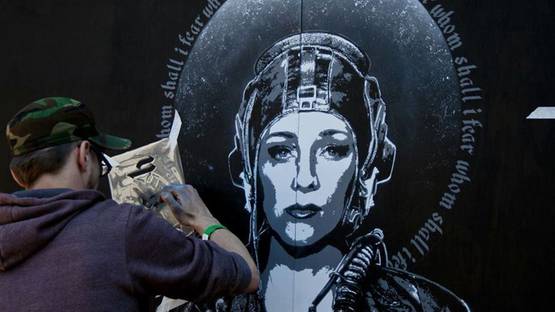 Tankpetrol is a Polish street artist, now based in Manchester. He uses stencils as his main medium, which he entangles with carefully placed background details, making neat, well-executed art pieces.

Born in 1982 in Poland as Irek Jasutowicz, he spent his teenage years doing graffiti tags all over the city. His obsession over details, visible in his artwork, was noticeable in his childhood – he used to spend hours assembling plastic models of planes and boats. In the later years, he joined the army, where he was a tank driver and tank gunner – and that’s from where his moniker originated. After quitting his army job, in 2006 he moved to Manchester in search of a decent paid job which he couldn’t find in Poland. It was in Manchester where Tankpatrol first got in touch with stencil art, inspired and influenced by anonymous street artists.

His search of personal style and development led him to complex look, in which he tries to fade stencils and spray paint using other techniques like acrylic paint and various mixed media. Although he doesn’t want to use multilayered stencils, in order to preserve a certain look of stencil art in his pieces, Tank’s works are highly detailed, full of background elements like upside-down triangles, geometric shapes, selfmade fonts, typography and logotypes. Central figures in his work in most cases are women dressed in military fashion, surrounded by animals and depicted in strong posture.

Using a combination of stencils, fonts and traditional paint, Tank is comfortable working across variety of media and projects that include painting, customizing, creating large scale murals, interior design and carpentry, always retaining a finest quality of his works.
Resident artist at Sketch City and Polish Invad Arts Collective, Tankpetrol has gone on to be commissioned by Sven Vath, Channel4, Diesel, Carhartt, San Disk and Red Bull. He has done live art for many UK and international festivals and events including Sketchcity, Kendal Calling, Mad Ferret, Eurocultured, D-percussion, Snowbombing Austria, Way Out West in Sweden and more. Tank has also exhibited internationally, starting off exhibiting at Upper Space Gallery – the first UK street-art gallery in the North West and going on to have packed out shows in Halifax and Poland as well as group shows in The Place, Graffik Gallery in London, The Urbis Art Fair in Manchester and Polish InvadArts in Leeds, Espionage Gallery in Australia, Pretty Portal in Germany and solo show in Luxembourg.