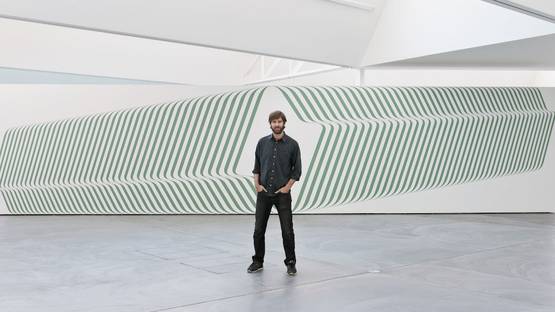 Minimal and subtle works of Terry Haggerty are definitely not thought just on the principle of repetition and stillness, as it can be the case with similar approaches. Rather, the occupation with movement and velocity of geometrical forms leads his concepts in different directions. It is the interplay of lines and colors and therefore optical effects those Illusions produce which suggest the complexity of gestures respectively their volume and depth. The viewer easily becomes drawn to their routes and in all smoothness of the surfaces, feeling challenged in regards to the perception.

Terry Hag¬gerty was born in 1970, in London. He attended the Cheltenham School of Art, Gloucestershire and started exhibiting soon after the end of studies. From the start, with his early paintings and drawings, the artist starts to examine visual possibilities of line and color in movement. Over the years the artist has achieved a large number of solo and group shows from New York to Berlin, as well as huge, site-specific commissions by private collectors and companies. The growing interest in Haggerty’s work increased after he became the recipient of several awards including the ForSite foundation Award (2009), John Anson Kittredge Award (2003) and the Natwest Art Prize (1999).

Large-scale works of Terry Haggerty are not paintings, nor objects. They cannot be quiet conveyed by the media, especially because artist’s apparent intention to engage the viewer. It seems that horizontal arrangements made out of patterns of stripes are always directed differently to be looked at. Actually, they are aimed as if to leave the borders of the surface on which they are painted. This particular method breaks the traditional formatting bounded in two-dimensionality and transformers it in three-dimensional illusion. That is why these visually grasping interventions possess certain participatory potential and are more than just basic installments.[1]

Intensity and velocity as useful elements

The art practice of Terry Haggerty is obviously driven by the achievements of Minimal, Pop and Op art. The principles of purification and adjustments are incorporated nicely, yet experimenting with the form in regards to space goes further. Nevertheless, his notion of abstraction is different. The central motif of stripe patterns is constantly being re-taught in not only painterly sense but rather sculptural. The finalized monochromes electrify and manipulate the space in an architectural sense and are somehow unpredictable and driven by the constant flow. The way the resist their physicality and lead the viewer through space suggest the artist’s attempt to create the surroundings for contemplative, yet active thought processes.

The quality of optical effects

The notable art practice of Terry Haggerty has been rounded by consistency in regards to the strong conceptual base and approach in general. On the other hand, the ongoing exhibiting activity is a proof of the continuity. Certainly, these two aspects of the artist’s work are important, yet that does not imply by the definition the sharpness or boldness of his agenda - the other thing does and that is the well-thought execution of his idea in relation to both the observers and space.Therefore, it can be said that his art is in relation to contemporaneity since it is governed not only by purely artistic, yet with even social matters.