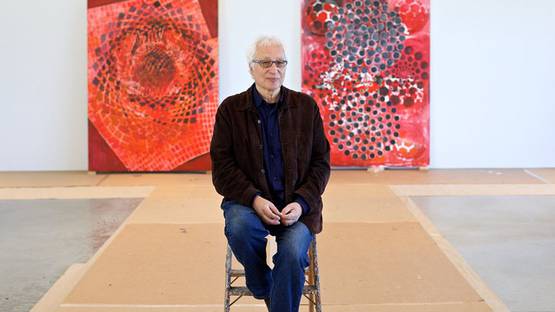 Terry Winters is an American painter and printmaker influenced by minimalism and non-narrative abstraction and his work represents various organic shapes, tangled forms and abstracted images of plants and flowers. At the same time, his painting are unique artistic references to scientific processes. Winters is interested in biology, chemistry, mineralogy and natural pigments and his art aims at exploring these areas in an unconventional and intuitive way. Winters’ work  has become more detailed over time, but his process of preparing the materials for his paintings remained intact – almost like a scientist, Winter is always doing a small research before the actual process of painting  and assembling collages of references.

Interest in Pigments and Mineralogy

Winters was born in Brooklyn, NY and studied at the prestigious Pratt Institute. He graduated in 1971, with a BFA in fine arts. Already as a student, Winters was interested in minimalism and wanted to explore for himself the reductive tendencies of the contemporary art. He was very diligent in his study and also quite secretive, because he was working silently for ten years after his graduation, not showing his work to anyone except to a small group of fellow artists. At the same time, he was collecting and reading books on pigments, biology, and mineralogy, because he wanted his art to explore the metaphoric potential of natural processes and materials. In the late 1970s, Winters already excelled in his study of pigments and his focus turned to creating spatial illusions in paintings. This time, he wanted to learn how to give a certain three-dimensionality to non-representational forms. This new interest of Winters’ is clearly visible in his paintings from the 80s, which are featuring complex and tangled paths, with the goal of creating the sense of depth.

Rich colorful patterns are common for the entire Winters' body of work. His paintings consist of many layers and intersecting or blending patterns . He often begins his artworks with the combination of interfering structures – for example, he combines wavy lines and strict grids, or helixes and grids. The transparency of his oil paints and the simplicity of his colors are some of the main characteristics of his work. Also, this limited palette of colors is allowing Winters to avoid the impression of chaos, no matter how complicated are his patterns. Winters is creating a very specific chaos – calm, controlled and constrained chaos. Almost like a mathematician Winters is carefully planning his brushstrokes and choice of colors,but at the same time, he leaves enough space for uncertainties and surprises.

Winters is creating a very specific chaos – calm, controlled and constrained one

Winters drawings and paintings have been shown at numerous solo and group exhibitions so far, including the important retrospective Whitney Museum of American Art,  Irish Museum of Modern Art and the prestigious show at the Metropolitan Museum of Art. He often works with a couple of fellow artists, like Tony Cragg and Stephen Mueller, who are having the similar interest in organic abstraction and the impact of modern technologies on artistic tendencies. Winters' work has gone through a perceptible evolution since the 90s, which can be easily spotted on his most recent artworks. Nowadays the artist tends to shift from large to small scale works, his compositions are looser and his forms more ambiguous. Along the same lines, the typical architectural grids he used the use in the past are gone or ended up completely abstracted. However, Winters’ main source of inspiration are still the natural sciences and information systems.

Winters' work has gone through a perceptible evolution since the 90s

Turning Away from the Tangible

Winters has been creating his puzzling abstract paintings inspired by the natural processes for longer than 30 years now and his easily recognizable bio-forms, such as cellular structures, molecules, plants and shellfish became his trademark motifs. What is even more interesting is the fact that Winters never stopped growing as an artist and after he achieved a worldwide success, he continued to explore the abstract minimalism and turned away from the tangible even more, guided by the digital technology advances. Winters’ interest in exploring space and challenging himself in unconventional ways has extended to installation nowadays, offering even more exciting material for his audience.

Featured image: Winters' portrait
All images courtesy of the artist.