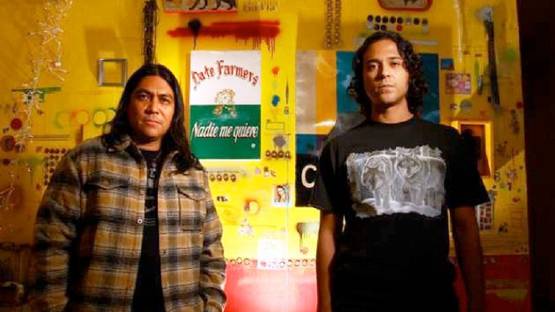 "Inspiration comes from anger but it also comes from love and everything in between. The teachers lied to us in school, the history books deceived us, and they continue the lie."

Originally from Indio, California, the duo combine familiar pop iconography – ranging from Mickey Mouse, Darth Vader, and Spiderman – to ‘amended’ corporate logos with figures from comics, folklore, and Catholicism. In these paintings, desert creatures – such as tarantulas, coyotes, scorpions, and rattlesnakes – are hand-painted on top of seemingly incongruous found signs with collaged lettering, along with such items as stamps, bottle caps, comic strips, and advertisements. The duo use larger-than-life figures and ideas, like Jesus and brand names, in what they call “Super Loco” also expanding the use of words mixing English and Spanish titles and flaunting creative misspellings like “Servicios D.J. Pleyboy” and the “Superchango.”

"The characters that we create are variations of characters we grew up with and still see around. They are family members, friends, enemies, and loved ones. They reflect feelings of alienation, redemption, love, hope, forgiveness, and basic instincts. We are storytellers."

The Date Farmers continue to develop what has become their signature aesthetic, incorporating found objects into their assemblage works which include aspects of collage, hand-painted typography, and cross-hatch drawing techniques. The work contains elements influenced by graffiti, Mexican street murals, traditional revolutionary posters, prison art, tattoos, and sign painting, while often combining familiar pop iconography and corporate logos with figures from comics, folklore and Catholicism. The artists use this language to create shadow-box dioramas and three-dimensional sculptures as well as two-dimensional pieces. Working on recycled metal signage and other alternative canvases, the pair create a dynamic dialogue between the subject matter and the materials themselves, resulting in vividly colorful imagery layered in rich texture and symbolism.

In appropriating images from popular culture, the Date Farmers give viewers an entryway to their work then play with the characters to distort them to suit their own messages. The flat blocks of color and cross-hatching accentuate the strong two-dimensional and stencil-like appearance of the work, connecting the artists to urban art. At the same time, the Date Farmers often leave the eyes of faces and creatures empty, as Modigliani did before them, but these artists utilize this technique in a very different way. There is an absence present in the eyes, a vacancy left for the viewer like the discarded signs were left for the artists to draw upon. The artists’ primal drive for personalization and craft within the playground of soulless advertisements makes the work intellectually stimulating and visually compelling.