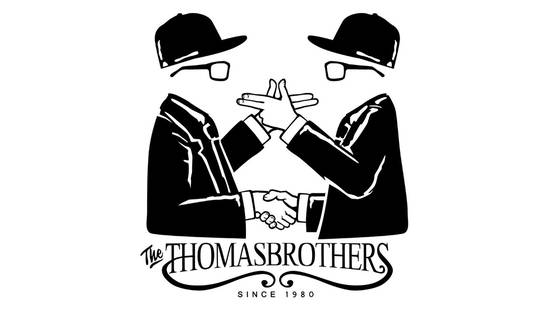 The Thomas Brothers are a British art duo who use the elements of their childhood, such as 80’s cartoons and Japanese toys and recreate them in the form of contemporary art. They represent sibling rivalry at its best, constantly competing and trying to out-do each other, while at the same time complementing each other.

The brothers grew up in the 80’s, the air of which is clearly present in their works – the icons and imagery constitute a large portion of their paintings, transformed by their childhood imagination, which they retain to this day. The 80’s influence is also evident in their style, reminiscent of comic style drawings, graffiti and pop culture of that time.

The themes often present in the brothers’ paintings are nostalgia, duality, good vs. evil, fairy tales and childhood. However, they must agree on a topic before they develop an idea further – as they say “the paintings are all the points in which our individualities overlap”. The passions both brothers share are for vintage toys, comics, and cartoons, which is plainly visible from their artwork.

How important their bond is to the brothers is evident in the process of their paintings’ creation, as well. They use a process of “collaborative layering”, an ever-changing process, t he only staple of which is that they are both involved in the creation of a piece, providing ideas in turn, developing them by adding background or new layers as the idea takes them.

Acrylic and Collage on Cardboard

The Thomas Brothers draw inspiration from artists who strive to transform comic book imagery into contemporary visual art. Among these are Yoshitomo Nara and Takashi Murakami, Hush, Mike Giant and Audrey Kawasaki. They also search for inspiration at comic cons, and in their own memorabilia collections.
The Thomas Brothers, in fact, seek to illustrate their sibling bond through their art. They find a piece of common ground, and then work their magic on it.

The brothers have participated in numerous group exhibitions. Most notable is Heroes & Villains organized by the Vertical Gallery in Chicago in 2015. They were also featured in the 2014’s Urban in Ibiza festival, at Atzaro, alongside such names as Banksy, David Walker and Pure Evil, to name a few.

The brothers are represented by the Vertical Gallery.

The Thomas Brothers live and create in Bristol, UK.