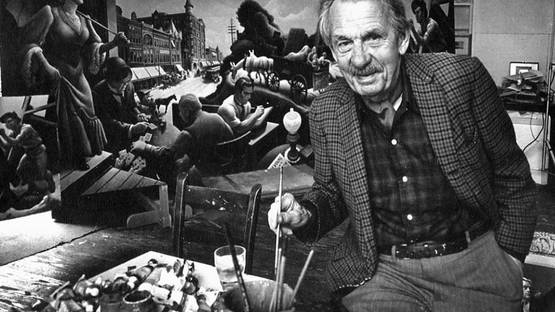 From an early age Benton showed remarkable skill as an artist, a talent his mother encouraged but which his father deplored, since he wished his son to focus on politics or law. Nevertheless, Benton persuaded his father to send him to art school in Chicago in 1907. He eventually transferred to the Julian Academy in Paris, where he was influenced by the style of Diego Rivera, a prominent muralist. It was Rivera's use of bright colors to depict socialism that inspired Benton's style during his Regionalism years. After studying in Europe, Benton moved to New York City in 1912 and resumed painting. During World War I, Benton took up a job as a draftsman for the Navy and switched from painting landscapes to sketching scenes from shipyard life. Back in the New York art scene during the 1920s, Benton taught at the Art Students League and began to gain acclaim for his works that addressed the social realities of the city.

The turning point in Benton's career came in 1924, when he returned to Missouri to visit his dying father, whom he had not seen in years. The talks he had with his father and with his father's old political cronies filled the artist with a desire to reconnect with the world of his childhood. Benton became more directly involved in politics and worked on the pieces for which he is most famous. He took pride in his Midwestern roots and began painting ordinary Americans not often shown in art. In his oeuvre, Benton showed working people in all regions of the States, including poor, rural areas. He called attention to problems that he thought all Americans should know about.

The Leader of the "Regionalist Movement"

Benton was best known to the public as the leader of the "Regionalist Movement" in American art, which opposed European modernism and focused on scenes of the American heartland; but he was also active in Social Realism, American Modernism, and Synchromism.
In 1930, Benton produced an enormous mural program, America Today, which received a great deal of attention. In 1932, he painted The Arts of Life in America, a set of large murals for an early site of the Whitney Museum of American Art. Major panels include Arts of the City, Arts of the West, Arts of the South and Indian Arts. In 1953 five of the panels were purchased by the New Britain Museum of American Art in Connecticut, and have since been displayed there.
In 1934, Benton was featured on one of the earliest color covers of Time magazine. Benton's work was featured along with that of fellow Midwesterners Grant Wood and John Steuart Curry in an article entitled "The U.S. Scene". The trio was featured as the new heroes of American art, and Regionalism was described as a significant art movement.

In September of 1935, Benton moved to Kansas City, Missouri. He lived there and worked in his studio until his death on January 19, 1975.