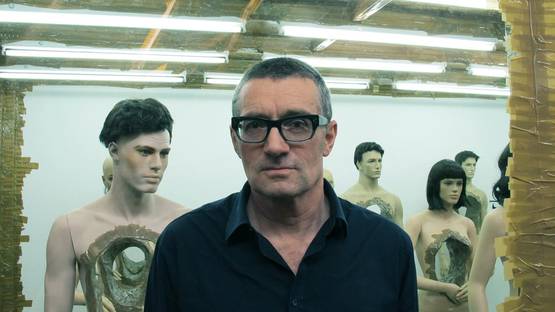 Thomas Hirschhorn is a Swiss artist born in Bern on May 16, 1957. In the 1980s, Hirschhorn worked in Paris as a graphic artist. He was a part of the group of Communist graphic designers called Grapus. These artists were concerned with politics and culture, displaying impromptu creations and posters on the street mostly using the language of advertisement. Hirschhorn eventually left Grapus to create the hypersaturated installations he is known for today, using common materials such as cardboard, foil, duct tape, and plastic wrap. He has described his choice to use everyday materials in his work as "political" and that he only uses materials that are “universal, economic, inclusive, and don’t bear any plus-value”.

Hirschorn's installations are often site specific, outside the gallery, and/or interactive. He continues to offer messages in his work, as he did with Grapus. He has said that he is interested in the “hard core of reality”, without illusions, and has displayed a strong commitment to his work and role as an artist. He has described working and production as “necessary”, discounting anyone who encourages him to not work hard, stating he wants to be overgiving in his work. For his piece Cavemanman, he has transformed a gallery space into a cave using wood, cardboard, and tape and has put various philosophical and pop culture symbols throughout it. Gramsci Monument (2013), named after the Italian thinker Antonio Gramsci, is the first project that Hirschhorn has built in the United States and the fourth and final such work in a series he began many years ago dedicated to his favorite philosophers, following a monument dedicated to Baruch Spinoza in Amsterdam in 1999, one to Gilles Deleuze in Avignon, France, in 2000 and a third to Georges Bataille in Kassel, Germany, in 2002. From the beginning, the monuments have been planned and constructed in housing projects occupied mostly by the poor and working class, with their agreement and help.

Hirschhorn's work has been the subject of numerous solo exhibitions including the Institute of Contemporary Art, Boston, Centre Georges Pompidou, Paris, Museu d'Art Contemporani, Barcelona, Kunsthaus Zürich, Art Institute of Chicago, Museum Ludwig, Cologne, and Wiener Secession, Vienna. In the summer of 2009, his work Cavemanman was recreated for the exhibition Walking in my Mind at London's Hayward Gallery. His works are held in the collections of the Museum of Modern Art, the Walker Art Center, and the Tate. He received the Marcel Duchamp Prize in 2000 and the Joseph Beuys Prize in 2004. In June 2011, Hirschhorn represented Switzerland at the Venice Biennale.