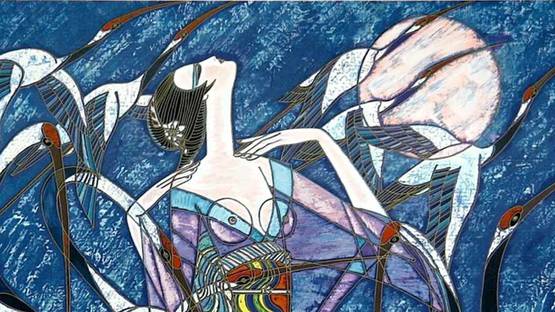 Retaining his style somewhere in between the East and West, Ting Shao Kuang was one of “disobedient” Chinese artists whose liberal artistic strivings were not supported by the authorities. Thought in the strict manner of Social Realism, he admired those who were not allowed risking the judgment and even forcible work in the labor camps like some of his fellow painters. Inspired by works of Picasso, Matisse, and Modigliani, the artist expanded his horizons moving hid style towards abstraction, experimenting with new themes and techniques.

Creating Under the Communist Regime

Ting Shao Kuang was born in 1939, in Chenggu, a small village located in the Northern province of Shanxi, China. His earliest childhood was marked by the horrors of the Sino-Japanese war that destroyed his land and left him abandoned after the evacuation of his parents to Taiwan. He found his consolation and escape in painting and by the age of 11, he painted on a daily basis, using the cooking oil as a medium for the pigment. Even besides his limited supplies, Ting Shao Kuang managed to use his extraordinary talent and got the opportunity to attend a prestigious high school which was connected with the Beijing’s Central Academy of Arts and Crafts where he later gained his further education. His painting lessons were based on rules of Social Realism without freedom of expression and with the strict prohibition of any foreign influences. After graduation in 1962, Kuang obtained a position to teach at the Yunnan Art Institute in Kunming. Painting the unacceptable abstract paintings during the night, he would destroy every piece of them in the morning, fearing of the arrestment of the authorities of the country. Still, Ting Shao Kuang's progressive and modern vision did not fail to attract the attention and he was suspended from his work and escaped to northern China, finding the refuge in Buddhist monasteries in Gansu where he studied ancient sculpture and cave paintings on the old Silk Route which had been preserved for centuries.

Using the distinctive technique, Ting Shao Kuang’s work combines traditional Chinese influences with the Western art forms. Always turning to the female characters as his favorite subjects, their sophisticated shapes have been created from the artist’s deepest feelings and literature that inspired him. After the death of Mao, Kuang and his colleagues founded the famous Yunnan Shen She Art Association and the artist got his first big commission to paint a mural in the Great Hall of the People. Although the achieved the success and recognition in his country, Ting Shao Kuang decided to try the luck in the United States. Living in the Los Angeles since 1980, his work has been exhibited in numerous shows worldwide.