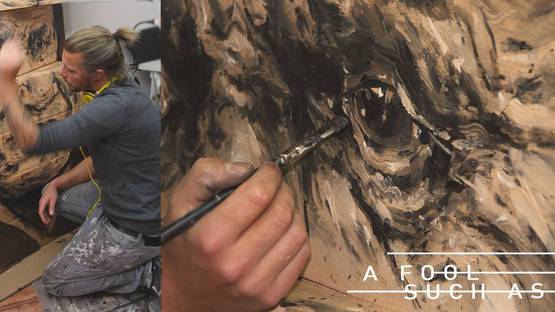 Tobias Kroeger, also known as Tobe, is a graffiti artist born in 1977 in Bremen, Germany. He painted his first graffiti in 1990 at the age of 12, and in 1997 he started working as a freelance graphic artist. Kroeger’s work was mainly influenced by the New York graffiti scene, which had a local, countrywide, and worldwide influence, originating in subway and spreading beyond it. In 2013, Kroeger changed his field of work from graphic design and public murals to canvas and contemporary art.

Tobe’s fictional, dark portraits, composed of data fragments and machine parts, give form to this concern about what it means to be human in a digital world. He is making use of traditional techniques like classical painting in oil or acrylic, creating, according to the artist, ’an exciting discussion regarding present and past, masses and individuals, communication and isolation’, all reflected in one of his latest works. The mural painted in occasion of Face Off, Kroeger’s first solo exhibition for which he created over 40 new works, is a reflection of his current work which deals with the idea of human self-understanding in a technologized everyday life. It features cubist face structures, opaque molded masks that remind you of traditional cubist painting, mixing traditional painting with the graphic shapes of urban art. His portraits are experiments, explorations to the unknown. He is searching for a contemporary way to paint the people of our century by using elements from fine art and graffiti to create a new, interesting and inspiring imagery, leaving his signature little T along the way. The graphic elements are used as a symbol of unfollowed dreams and heteronomy in our society. According to Tobe, this new mural is the first of a series of portraits he will be painting in the next months at this very same place located near Bremen’s main street next to the harbour.

Inspired by the stories of Bremen’s former harbour society and workers, now for long gone, Tobias Kroeger creates dark, delicate and melancholic portraits that own a sense of architectural narrative that highlights the already clear references to traditional modern painting. Recurrent and often used detail in Kroeger’s work is the figure of the monolith, which, according to the artist, plays a central role in his work having the faculty to disturb and trouble the viewer, challenging the way we look at pictures.

Tobias lives and creates in his birth town of Bremen, Germany.