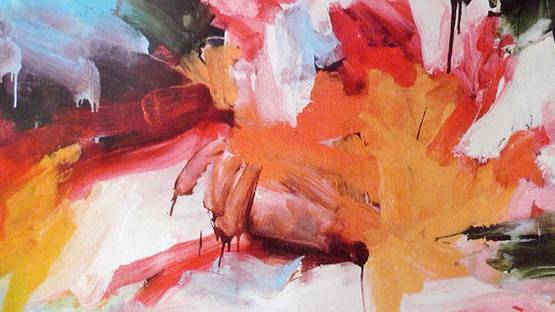 Todd Hunter's work is a constant war between rational and irrational – when should an artist have a complete control and when should he let go to the instincts. Conscious work can give great results in utilizing the things you've learned through artistic experience. But if an artist relies just on this aspect of the mind, the never-ending sky of unknown will be left unexplored. Hunter’s work constantly dances between these two sides, trying to figure out when should you create with your mind, and when should you create with your soul.

Todd Hunter's work is a constant war between rational and irrational

For himself, Hunter says he’s neither an abstract nor figurative painter. On first sight of his art, your impression will lean towards the abstract side, but as you gaze at his paintings for a longer time, you’ll soon discover different shapes, hands, faces and even entire bodies. It’s even possible, the shapes one person sees, won’t be the same for another. His paintings negate the existing shapes and create alternative versions, which do not belong in this world, but in another – perhaps the world he himself created. It’s a magnetic world of constant reshaping, which Hunter catches in paintings for the viewer to review and figure out what they represent. It’s this part that shows the true nature of his work. It doesn’t matter if another person will be able to correctly describe Hunter’s visualizations because it’s not possible. Hunter gives his personal description of the world he found, and the viewers are here to further extend it through their own experience of it.

It’s a magnetic world of constant reshaping, which Hunter catches in his paintings

Unlike other artists, Hunter doesn’t add to achieve a more striking result. Quite contrary, he erases. His process of painting is like a journey. You need to get from one point to another, but sooner or later you realize you’ve gone too far and you need to retrace your steps by deleting the unneeded. In the example of Todd Hunter’s work, words like deleting or erasing don’t have the usual meaning. By removing something, he doesn’t negate the past existence of the removed element, he gives it meaning by acknowledging the erasing process. Hunter realizes if it wasn’t for the destruction of an aspect, he would never be able to arrive at the current point he finds himself in. If it wasn’t for the wrong turns along the path, he would constantly be on the safe track and by that, he would miss all the possibilities the unknown provides.

By removing something, he gives it meaning by acknowledging the erasing process

Hunter’s often lets music to influence him for his canvases. Some of the songwriters he’s influenced by are Bob Dylan, Nick Cave, and Tom Waits. By visualizing the worlds and characters these musicians describe, Hunter tries to transfer them to the canvas. Although it can be hard to describe the core of his work and if it even exists – it can safely be said, his inspirations surround him – both his visual and auditory perception. When he finishes a painting, this piece of work begins an existence of its own and the only further option Hunter has is either to leave it as it is or to completely erase it.