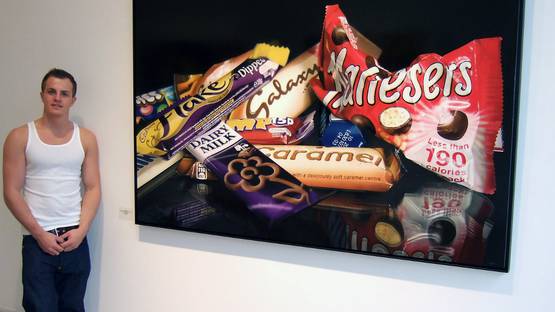 Tom Martin in a British artist, born in 1986 in Wakefield, England. He studied Interdisciplinary Art and Design at the University of Huddersfield and graduated in 2008 with first class honors BA. After he finished his education, he started working and regularly exhibiting his work, in London at Plus One Gallery, and more recently in New York at DeBuck Gallery. Working for over five years, Martin’s work was often featured in various art fairs, such as Art London or SCOPE NY, and he has been published on numerous occasions. In 2009, he had his first solo show in London. In 2012 he met HRH Prince Charles to discuss his work.

Tom Martin is unique in his choice of subject matter and his approach to rendering it in a paint. In practice his work is hyper-realistic, and many of the paintings are panoramic, giving the impression that we are seeing is not only what is immediately in camera range, but also around corners which would be beyond the capabilities of any camera to reach. Martin makes clear that his paintings are devised with the aid of many photographs, welded together and reimagined with considerable technical virtuosity and a constructive mastery of perspective. Consequently, surprisingly, this approach brings Martin closer to the early Pre-Raphaelite practice than most other hyperrealist artists. Though his subject matter, the high-tech machine, could hardly be more remote in feeling from the leaves and flowers that preoccupied the Pre-Raphaelite painters, the ultimate hallucinatory effect of seeing more than the human eye, or now, than any camera lens could ever see at one go, is exactly the same. About his art, Tom Martin said: “My choice of subject is personal to me, and to an extent, me only. The items featured in my paintings are nothing more than fractions of my everyday life. The imagery in my work, is based upon foods I consume on a daily basis. I find myself fascinated by the way products are packaged, the texts that are used, and the way these items react to light in their surroundings. Occasionally, hard-edged pieces of chrome gym equipment find their way into the compositions. These rather banal pieces of steel are far from any idyllic ideas of what is or is not beautiful. However, by making ‘super-sized’ paintings of these objects, I am able to pack in many unseen intricate reflections and abstracted bands of color. The subject becomes fascinating despite its origins, as the viewer is enabled to see closer than we would normally care to do. Although the paintings I make are directly based upon one, or several photographs, I intended to go beyond simply making a copy of a photograph. My aim primarily is to create an impossible existence, a hyperreality itself. Something which, despite its massively enlarged scale, is questionable real. I make use of various devices to bring forward elements of the composition, whilst pushing other areas back deeper into the painting. I want the subject to appear to project further than the plane of the canvas, to have a presence, putting the viewer somewhere in the physical experience of the painting.”

Hyper-Tom's, as he is known, work, was exhibited worldwide in cities such as Melbourne, Montreal and also in New York at the Louis. K. Meisel gallery. For his work he received an Exhibition Award, Contemporary Realism Biennial in 2014, and Rotherham Artist of the Year Under 25 in 2007.

Tom Martin lives with his partner in the United Kingdom. He recently built and moved into a brand new studio space where he has put together a body of work for his solo exhibition in November 2014, (Filthy) Lucre at DeBuck Gallery, New York.