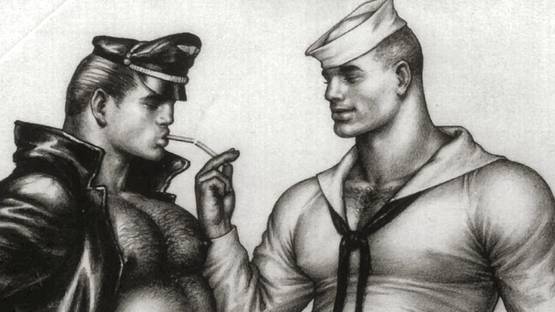 Thought the homoerotic images have been present in the visual arts throughout the history, the concept gained its real popularity with the work of gay Finland artist Touko Laaksonen. Best known by his pseudonym, Tom of Finland, this creative is notorious for his controversial, fetishistic representations of men. His oeuvre spread to countries worldwide and has had an enormous influence on gay identity. In a career which encompassed more than forty years of making art, Tom of Finland's output came to include over 3500 illustrations, mostly featuring homoerotic archetypes such as lumberjacks, sailors, bikers, police and men dressed in leather. Laaksonen’s famous Kake comics featured gay men as happy, healthy, and normal people in order to change the negative myths and stereotypes about gay people which often depict them as unhappy and self-loathing individuals.

Born in 1920 in Kaarina, a small town located in the Southwest Finland, Touko grew up with an appreciation for art, music, and literature in a middle-class family. Both his parents were grammar school teachers, so the family lived in the school building. In 1939 Touko Laaksonen left his hometown to attend art school and study advertising in Helsinki. There he created his first homoerotic drawings for his own personal enjoyment, but he destroyed all of them before joining the Finnish Army in 1940 in its fight against the Soviet invasion. His early illustrations were based on images of masculine laborers he had seen growing up. Having served as a second lieutenant, Touko Laaksonen became fascinated by men in uniform and began to portray an idealized male form in his works. In 1945, Laaksonen left the Army after the war and returned to his studies in art and advertising. Touko’s artwork of this period compared to later works is considered more romantic and softer with gentle-featured shapes and forms. His subjects, however, even in his earliest pieces dating from the first half of the 1940s are ecstatic, gushing, and ejaculating.

After WWII, Laaksonen continued to draw his fantasies and, urged by close friends, submitted some of his own illustrations to the American bodybuilding magazine Physique Pictorial. Because of the conservative social climate in 1957, he signed them "Tom", but the magazine editor credited the work to “Tom of Finland,” which then became Laaksonen’s popular handle. His images were an immediate success. The post-World War II era saw the rise of the biker culture which provided postwar gay men with a stylized masculinity that included rebelliousness and danger instead of dominant gay stereotypes which presented gay men as effeminate. The artist was influenced by images of bikers as well as artwork of a gay American artist George Quaintance, among others. Laaksonen's illustrations of bikers and leathermen capitalized on the leather and denim outfits which distinguished those subjects from mainstream sexual cultures.

In the 1950s and 1960s, the United States censorship laws that prohibited a depiction of homosexual pornography relatively influenced the style and context of Laakonen’s own work; by this time, however, Laaksonen rendering private commissions, which provided him with the creative freedom to produce more explicit - but unpublished - works. His published works from this period often featured images of handsome, muscular young men in athletic poses often shown demonstrating exercises. The turning point was the 1962 case of MANual Enterprises v. Day when the United States Supreme Court ruled that magazines consisting largely of photographs of nude or near-nude male models are not obscene. It opened the US mail to nude male pornographic magazines, especially those catering to homosexuals. Tom of Finland reacted by publishing more explicit drawings and stylized his subjects’ fantastical aspects with overemphasized physical aspects, especially their genitals and muscles.

Tom of Finland applied his love of machismo with his natural artistic talent to make homoerotic images that glorify the idealized male form. Towards the mid-1970s, he began to emphasize photorealistic aspects of his style. Many of his artworks are based on photographs, but none are exact reproductions of them. The artist combined photorealistic attention to detail with his wild sexual fantasies to produce a remarkable body of work. One of the most famous examples of this period is the 1975 drawing in which a naked man floating in space and literally fucks the beach-ball-size Earth.

In 1991, the America film distributor Zeitgeist Films released a video biography, titled Daddy and the Muscle Academy: The Life and Art of Tom of Finland which included interviews with Tom himself, commentary from his "leather men," numerous of original drawings and steamy fantasy scenes inspired by his art. The documentary was shown on Finnish national TV and won a Jussi Award – the annual film awards for the best achievements within Finnish cinema – in 1992 and was shown at many international film festivals. In September 2014, Itella Posti released a set of stamps in Finland to honor Tom of Finland. Designed by Finnish graphic artist Timo Berry, the set contains three 1st class adhesive stamps. The two drawing that appears on the stamp sheet are both untitled and date in the late 70's.

In 2014, Itella Posti released a set of stamps in Finland to honor Tom of Finland

Since his first exhibition at The Revolt Press Bookstore in Hamburg, Germany in 1973, Tom of Finland has participated in over a hundred individual and collective shows throughout the globe. In 1978, he had his first show at the United States held at Stompers, a boots store in the West Village, New York. Tom of Finland’s first gallery show was held at Feyway Studios in San Francisco. At the same event, he met a gay photographer Robert Mapplethorpe known for his sometimes controversial large-scale, highly stylized black and white photography. Mapplethorpe helped Tom to organize his first major New York show at Robert Samuel Gallery in 1980. Since then his work was on display in numerous individual and collective shows throughout the globe.

The Influence of Tom of Finland

Useful Resources On Tom of Finland