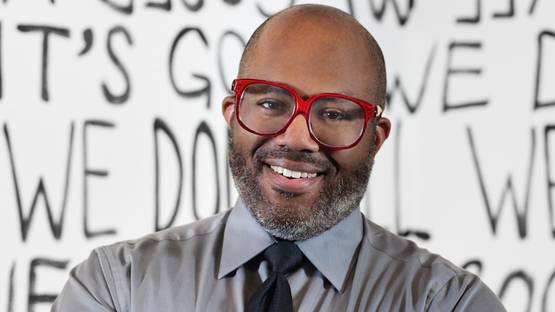 The space of the canvas truly is an endless field, and artists have been filling it with scenes and themes ranging from the cruelest reality to the wildest dreams. Finding his inspiration both in grounded thought and imagination, Trenton Doyle Hancock mixes pop culture imagery, Biblical stories and some storytelling of his own to unveil an allegorical tale of Mounds and Vegans. Dealing with the oppositions of stability and its disturbance, life and death, reality and dream, Hancock continues to develop the narrative in vivid depictions that often stretch beyond the boundaries of the canvas.

Trenton Doyle Hancock mixes pop culture imagery, Biblical stories and some storytelling of his own

What lies at the center of Trenton Doyle Hancock’s practice is the narrative, a story that has been developing through a number of his works and keeps to do so with each new one. The protagonists of the story created by the artist are known as Mounds, mythical creatures with physical features of both animals and plants that serve as good-doers of Earth. Opposing the stability that they represent are the skeletal-like Vegans, constantly conflicting and battling for supremacy. The struggle that permeates the ongoing narrative, much like many of the sub-plots depicted in his works, is symbolic, speaking of the discord and hostility existing between humans. By reinterpreting old fables and contemporary ideology, Hancock tells a story that is close to and easily connectable with the people of today.

Drawing out of Many Sources

In order to continue the story and create his detailed pieces, Trenton Doyle Hancock utilizes several different sources material. His stunning paintings, drawings, and prints can be visually related to the pulp imagery of pop culture, whereas the narrative often draws out of Biblical stories that the artist had heard as a child. The written word plays a centripetal role in his works, tending to sprawl beyond the confinements of the canvas and onto the gallery walls. Combining all of these components with his imagination and a skillful hand, Hancock has made a unique tale that he keeps building upon in his artistic practice. With an apparent symbolical influence in the contemporary world, it has even been translated to the ballet floor, executed as Cult of Color: Call to Color.

Alluding to the ever present conflict that exists within the human society, Trenton Doyle Hancock’s allegorical pieces, although standing as a fable of their own, each portrays a part of a bigger story in a vivid manner. Featuring fictional, mythical creatures in an array of colors, words, shapes, and forms, he even made himself a part of the tale as his later works depict him as one of the protagonists. Mixing in several components, Hancock is the creator of a story alluring to any modern mind, one told through his artistic practice.