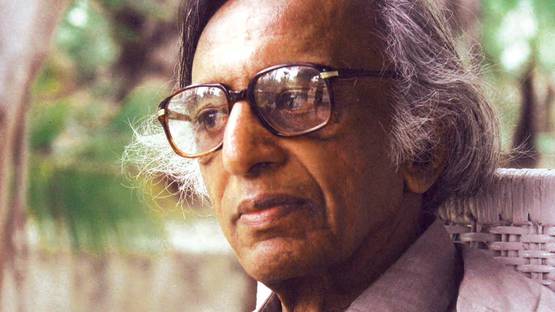 Tayyabb Mehta was a noted Indian painter. He was part of the Bombay Progressive Artists' Group, which included greats like F.N. Souza, S.H. Raza and M.F. Husain, and the first post-colonial generation of artists in India.

Born in Gujurat, in western India, Mehta grew up in a Shiite community in Mumbai; several members of his family worked in film, and Mehta grew up working with films, later establishing himself as a celebrated filmmaker in addition to painting. He attended the Sir J.J. School of Art in Mumbai as a young man, studied European modernist artists; during his time in school, India and Pakistan asserted their political independence and enforced a partition between the two countries, based on separating those of Hindu and Muslim faiths.

His work is characterized by matt surfaces, diagonal lines breaking his canvases, and images of anguish - a result of his preoccupation with formalist means of expression. Mehta's use of the flat planes of color to conjure space and the diagonal division of it were both devices that existed in the Indian miniature tradition but also his additions to the Baconian style of the macabre.

About his own growth as an artist, Mehta said, "An artist comes to terms with certain images. He arrives at certain conventions by a process of reduction." Like most other artists of the Progressive Artists Movement in India, Mehta could trace his influence to the European masters. His inspiration came from the macabre distortion used by artist Francis Bacon, which can be seen even in the handling of the face and the body of his most recent works, before his death in 2009. Of his early works, Mehta had this to say: "When you are young, you try to understand the world. As you grow old, you try to understand yourself. Your work then becomes the essence of these efforts."

Among his most noted later paintings were his triptych Celebration, which when sold for Rs 15 million ($317,500) at a Christie's auction in 2002, was not only the highest sum for an Indian painting at an international auction, but also triggered the subsequent great Indian art boom; his other noted works were the 'Diagonal Series', Santiniketan triptych series, Kali, Mahishasura (1996). He stayed and worked in Mumbai for much of his life, except for three spells at London, New York, and Santiniketan, each having a distinct impact upon his work. He received several awards during his career including the Padma Bhushan by Govt. of India in 2007.

Tayyab Mehta spent most of life in Mumbai and later in life stayed at Lokhandwala, Mumbai. He died on 2 July 2009 at a Mumbai hospital following a heart attack.