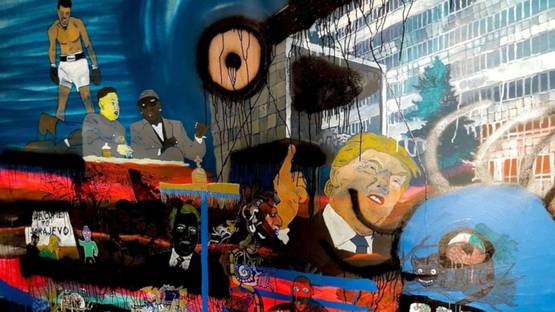 Born in Sweden in 1988, Ulfur Karlsson is an Icelandic artist and film director. He began his career making short films and documentaries, he became more interested in the individual frame, the story it contains and the frozen movement, shifting to painting. Evoking the atmosphere of moving pictures, his works are built with spontaneous swift movement and force.

Karlsson draws small figures and places them in scenes of striking colors, making hints to the uncanny half-stories that evolve into a world that is derived from both fiction and real-life affairs. Drawing from his political, social and personal surroundings, he lets whatever is happening around him enter the paintings, which thus acquire the speed, punchlines and drama of films.

Karlsson uses the materials at hand, such as spray, found objects and walls, combined with the traditional techniques of painting and drawing. While working he also has a viewer in mind, making conversation with him. He explains that art pieces should be remembered in people’s hearts long after they’ve seen them, like a good film.