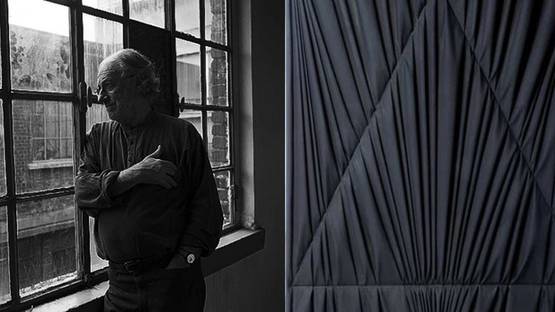 Umberto Mariani is an Italian Post-War multimedia artist whose work displays a special affinity to the folds of textiles.

Mariani was born in Italy in 1936. He graduated from the Accademia di Brera under Achille Funi with honors. Although he studied the masters of the Romantic period and was surrounded with the emerging movements of Pop Art and Surrealism, the most profound influences he drew his style were the Classical Greek statues that he grew up observing on the streets of Italy. Mariani’s fascination with the delicate folds of fabric carved out of the hard white marble would later develop into a desire to manipulate the material.

Best known for his complex draperies on irregular-shaped canvases, his work explores illusions of light and shadow created within the folds of fabric. After an expressionistic phase inspired by Constant Permeke, Umberto Mariani develops a personal artistic code between Pop-art and Surrealism. He picked up his first projects doing monumental narrative work for the St. Peter’s Basilica in Vatican as well as mosaics and frescos for the St. Antony Sanctuary in Rome during the 1960s. In the 1970s he was widely exhibited in Europe at institutions such as the Palais des Beaux Arts in Brussels and the Musée Moderne in Paris. New multidimensional canvas works combine intricate drapery over elusive lead sheets, where the fabric both serves the purpose of concealing a mysterious object beneath, while also evoking its presence.

He lives and works in Milan, Italy.