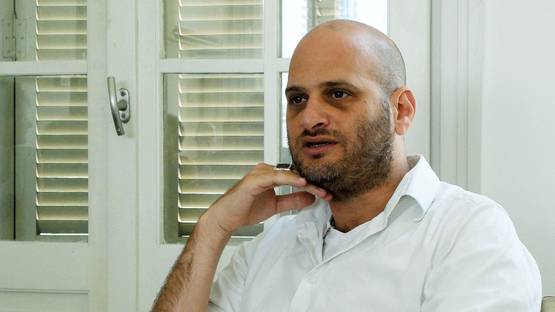 Uri Gershuni is famous Israeli photographer known to a wider public for his provocative portraits in which he confronts contrasting notions. His work is typified by formalist austerity, on the one hand, and a type of liberated thematic wildness, on the other. It challenges the viewer by juxtaposing artistic, aesthetic, and moral questions, forcing her to confront her own private values. His work frequently explores aspects of interpersonal tension or closeness generated under conditions of strangeness.

Uri Gershuni was born in Tel Aviv in 1970. He obtained his BFA and MFA from the Departments of Photography and Fine Arts at the Bezalel Academy of Art and Design, Jerusalem and Tel Aviv. He has received the Young Artist Award, the Israeli Ministry of Science,Culture and Sport in 2000, the Young Photographer Award, Haifa Museum of Art in 2005, and a prize on behalf of the Heskia-Hacmun Law Firm in2007. He is also a recipient of the Local Photography Research Grant, awarded by The Shpilman Institute for Photography in 2012. Gershuni has received the grant for the publication of the artist book which accompanied his exhibition” Yesterday’s Sun” which was presented in 2012. In this exhibition Gershuni sought an absent father figure as he searched for the patriarch of photography who is at the same time his own founding father. His voyage to Lacock is an act essentially reminiscent of eschatological pilgrimage. Besides his numerous awards, Gershuni is also involved in academic capacity as he is a teacher at the department as well as at the WIZO Haifa Academy of Design and Education.

Gershuni has had solo exhibitions at the Tel-aviv museum of art, Haifa museum of art, and the chelouche gallery, Tel Aviv, among other venues, and participated in numerous group exhibitions in Israel and abroad. Gershuni published two artist books titled: day and night and yesterday's sun. He is represented by Chelouche gallery in Israel. Among his better known projects is the Clubbers series created between 2003 and 2005.