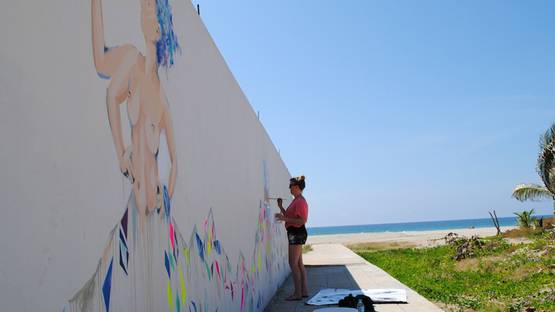 Vexta is an Australian stencil and fine artist, recognized in the street art scene as one of the leading female artists whose work surrounds the concepts of death, rebirth and the duality of the sexes.

She began her career as an artist predominately working on the streets of Melbourne and Sydney, New South Wales. Today Vexta is working within both urban environments and gallery spaces and she has been called one of Australia's few female stencil artists to have achieved wide recognition by Lois Stavsky, author of the seminal Graffiti 365 art book.

When Vexta moved from her home town of Sydney to Melbourne in the mid-2000s, she has been studying and working alongside infamous stencil artists such as Dlux, Optic, Sync, and Ha-Ha. So, she began cutting and spraying her own stencils - of colorful, neon-drenched images of fallen figures with feathered wings and her iconic kissing skeletons took over Melbourne's streets cemented her place within the burgeoning scene, of which she is now a main figure.

This has been evidenced by the support she has received from influential players such as Banksy, who invited her to show alongside him in London at the 2008 Cans Festival, as well as being represented and credited in his highly successful film, Exit through the Gift Shop. She was also recently a feature artist the inaugural Outpost Street Art Festival in Sydney Australia in 2012.

Integral to Vexta’s practice is bringing art to the people on the streets and as such she has generated a large following in Australia, Europe & the Americas. She is most famously known for her stencil paintings and wheat-pastes which draw from cultural visual debris, herself taught aesthetic and an ongoing exploration of printmaking and painting. These works have been seen on the streets of Paris, Sydney, Mexico City, Bogota, San Francisco and New York to name a few.

Her iconic psychedelic artworks are influenced by a personal symbolism and a greater urban mythology which connect the dots between the personal and the universal, our waking lives & the dreams beneath them, between acute cultural commentary and aching beauty.

Vexta's motivation for stencil art is both artistic and socio-political. Her main aim in her work is to connect with the public on an emotional level.

She has work held in major collections, including The National Gallery of Australia and recently she was included in the definitive Thames & Hudson World of Art: Street Art & Graffiti book (2012) as one of only 4 female street artists.

Vexta moved to Brooklyn and she is traveling a lot - painting walls, making art for music festivals and other exhibitions, commissions and projects in India, Mexico, Australia and across Europe.