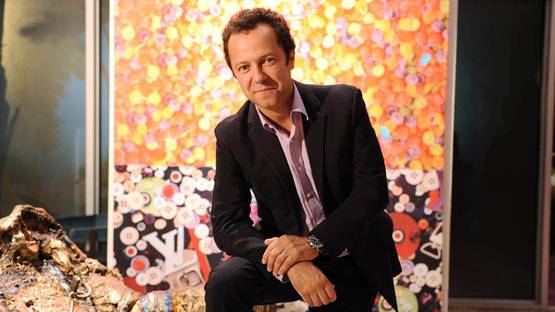 Vik Muniz is a Brazilian visual artist who uses unexpected materials and everyday objects such as sugar, dust, chocolate or garbage in his procedures of creating bold, ironic and often deceiving imagery, inspired by the pop culture and history.  Muniz started to discover art in the books he borrowed from his high school library and he began his career as a sculptor in the late 1980s. However, he gradually became more interested in drawing and photography and he built his own, uniquely experimental artistic processes.

Painting Related to Chocolate and Diamonds

Already as a teenager, Muniz was working in the realm of visual arts. He was redesigning billboards for higher readability in his native Brazil, but after he arrived in New York City in 1983, his friend lent him a studio and he started his career as a sculptor. In addition to sculpting, Muniz began experimenting with drawing and photography and he decided to combine both approaches in his series Sugar Children, which was exhibited in MOMA in 1997. Muniz is best known for recreating famous scenes from art history and pop culture with unexpected, often edible objects. He also explored the human memory and perception through the images represented in arts and communication. For example, The Best of Life  series of drawings in the reproduction of the famous photographs Muniz have seen and remembered from the magazine Life. In the mid-1990s, in order to create witty, bold, and often deceiving images based on photojournalism and history, Muniz began to incorporate diamonds, sugar, dry pigment, caviar and wire into his photographic processes. In 1997, Muniz became well-known for his Pictures of Chocolate series, in which he used chocolate syrup to create his works. The artist borrowed imagery from popular culture and old masters of painting to make his works more familiar. He playfully calls this approach the worst possible illusion.

Waste Land is documentary from 2010, directed by Lucy Walker and it follows Vik Muniz as he travels from his home in Brooklyn to his native Brazil to see the world's largest garbage dump, Jardim Gramacho, located on the outskirts of Rio de Janeiro. Waste Land project was being filmed for almost three years and during this time, Muniz was creating artworks from the recyclables found at Jardim Gramacho landfill. Muniz collaborated with catadores, the people employed to pick out recyclable material from garbage and he created his famous large-scale mosaic portraits. These pieces were sold at auctions in London and exhibited at the Museum of Modern Art in Sao Paulo. The project was nominated for the Academy Award for Best Documentary Feature at the 83rd Academy Awards.

Waste Land was being filmed for almost three years and during this time, Muniz was creating artworks from the recyclables found at Jardim Gramacho landfill

Vik Muniz is a very active artist who continuously participates in various international shows. In 2016, he joined FotoFest Biennial in Houston TX, which main topic is the preservation of natural world and the humanity’s place in such world. Featured projects in the show address the issues of climate change, industrialization, urbanization, biodiversity, energy production and handling of waste. The money Muniz has earned at FotoFest by selling his artworks from the Pictures of Garbage series was given to the garbage collectors in Brazil, so they can improve life in their communities. In additio to his carreer in visual arts, Muniz is also a great lecturer who loves to talk about the social consciousness his work is infused with. He held a famous TED talk in 2007 and was nominated as a Goodwill Ambassador by UNESCO.

In 2016, Muniz joined FotoFest Biennial in Houston TX, which main topic is the preservation of natural world

Vik Muniz is an artist who finds a special delight in subverting and exceding his viewers' expectations. Because of his use of unexpected and even bizarre materials to create portraits, landscapes and still lifes, Muniz is often considered as a master illusionist. Yet, he claims that he's not interested in fooling people - he just wants to show them the power of his unique approach which is beyond the traditional artistic styles.  Muniz's work has won a lot of commercial success and great critical acclaim and has been exhibited worldwide. What's even more striking is the fact that one of his his solo shows at MAM in Rio de Janeiro was second only to Picasso in attendee numbers.

Featured image: The artist's portrait - image via whtrust.org
All other images © the artist